“Konservasi biota laut Berau” is entire name of Indonesia non-profit sea turtle protection organization founded by Czech biologist Hanou Svobodova (www.morskezelvy.cz) based in islands BilangBilangan and Mataha. With 10 (in winter) and up to 50 (in summer) turtles coming to nest here daily, it is the 7th most important place in the world where turtles are nesting and need to be protected if they should survive. All necessary information about volunteering in the islands can be found in this document, eventually you can contact Hana directly on Facebook https://www.facebook.com/morskezelvycz-607230715971714/ (both related to volunteering in the islands, or with any other support offer)

JOURNEY:
As in the islands there is no fresh water, it needs to be imported. That is why we go by big wooden boat and bringing 5 thousand litters of fresh water, which will be enough for 10 people for approximately one month (longer if it rains) 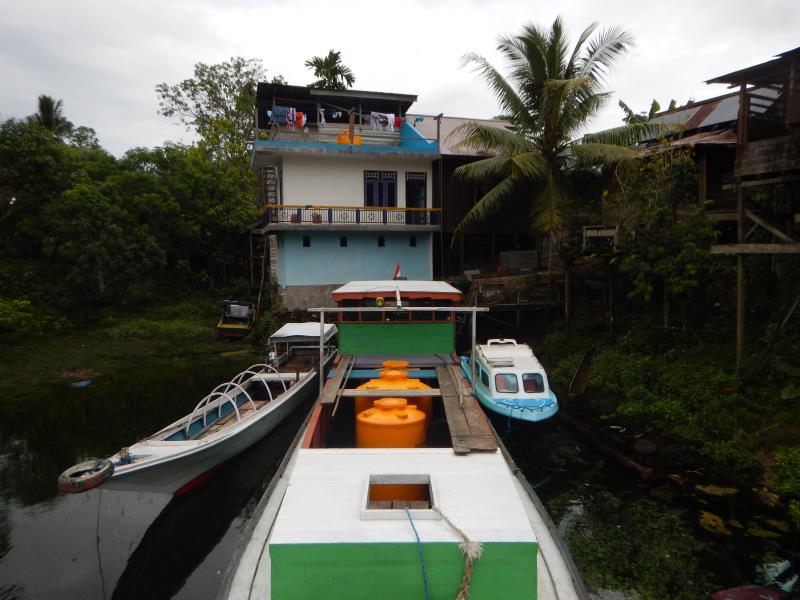 It is pretty difficult to navigate with 15 meters long boat in just few meters wide river – we had to wait 5 hours for high tide and the journey should last 6 hours instead of just two and half on a speed boat. Additionally, there was strong wind and big waves, so it took 11 hours to arrive to the island and we had to wait one more hour for high tide -> exactly half a day on the boat. On the other side – swimming with this big boat in mangrove forest felt like in Huckleberry Finn and his adventure on Mississippi. 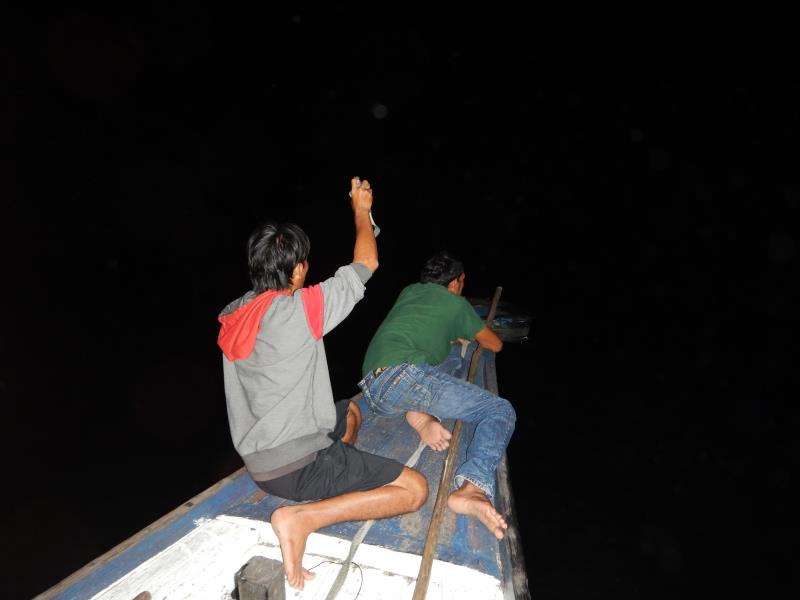 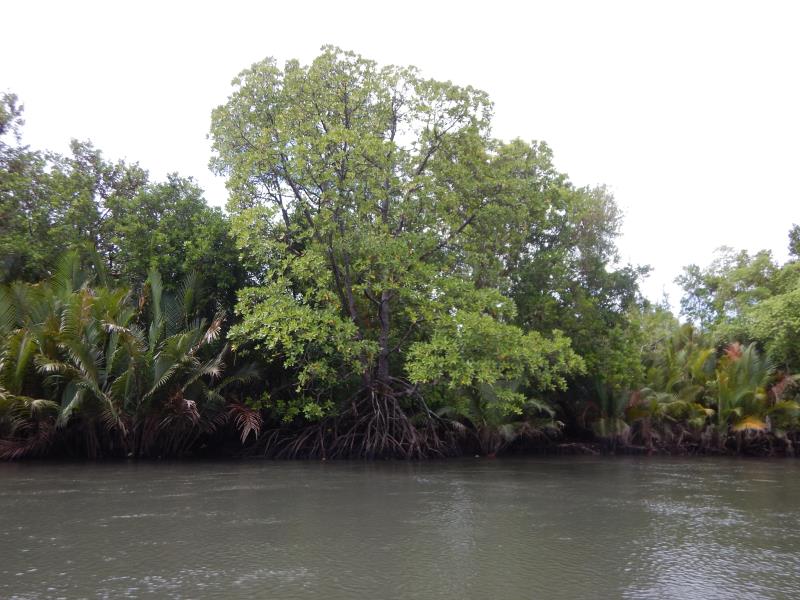 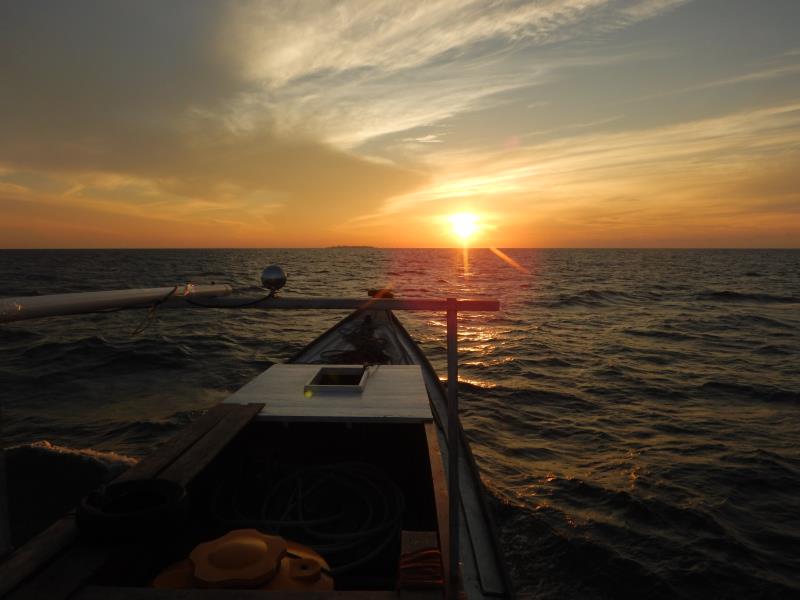 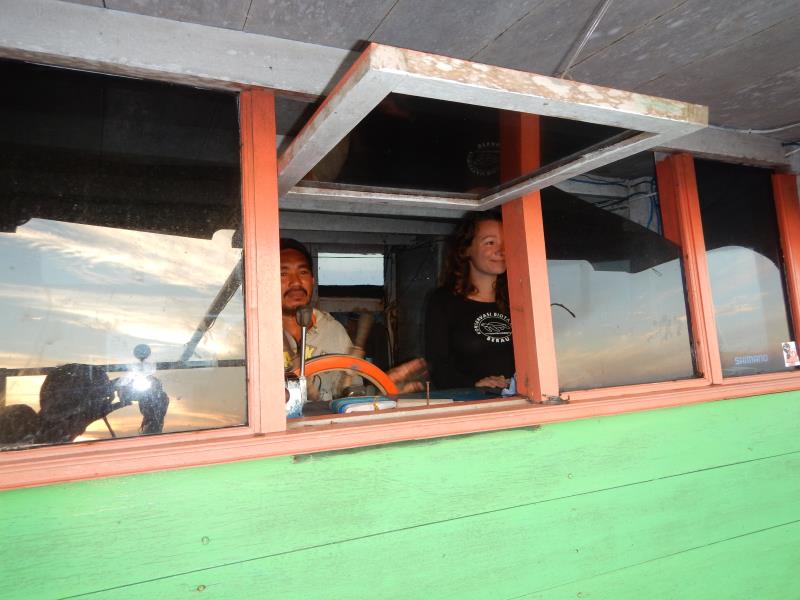 Bayu and Erik from other nature protection group ProFauna joined us on this way and they were really helpful when getting our load from the boat to the island. One was vomiting from boat, second could not stand the seasickness anymore and decided do swim on the island although he is not really good swimmer, so needed help to get out of the water 

Move all food (rice, vegetable, fruit), equipment (matrasses, batteries, torches, etc.), our backpacks and especially the water took another 2 hours (because of middle step of going from big boat to small boat and only then to the island)

DAILY SCHEDULE:
6:00 check the beach and move new nests from inappropriate places (high tide could flood out the nests and drown the turtles, etc.) and eventually help adult turtles which remained trapped in the island
16:00 walk around the island again and search for nests with traces of yesterday born hatchings entering the sea. Those nests are then checked, rangers count how many eggs are there and help hatchlings which could not make it on their own (blocked by tree roots etc.) They would probably suffocate in the nest or varan would eat them.
19:00 release of collected eggs to the sea – for me definitely the most beautiful moment of the day. Up to 500 small turtles, which would probably die without our help, are released in the beach and you can see how all of them are running to the sea, leaded by the light sky in the horizon.
24:00 walk around the island for the last time as a protection against egg rubbers, eventually moving inappropriately positioned new nests.
In free time the rangers are creating souvenirs (turtles) from coconuts, play chess, or guitar, cooking fishing, etc.

In a free time Hana asked me if WE could paint rangers bathroom, as the old color was not nice anymore. Expecting how we will be sweating TOGETHER I agreed and immediately started working 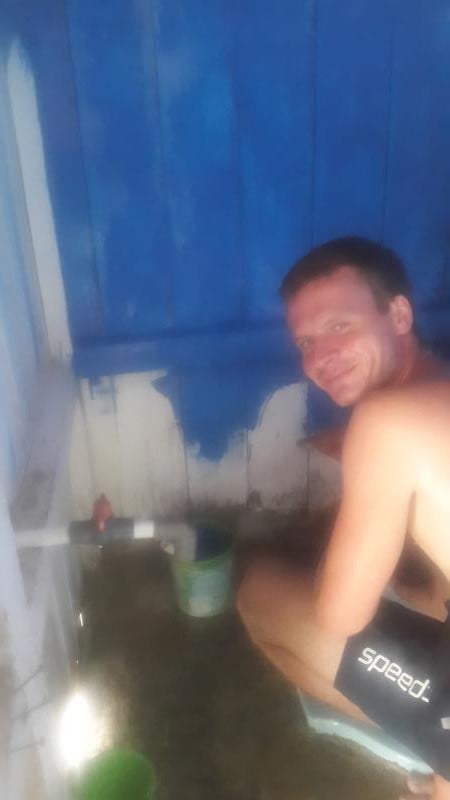 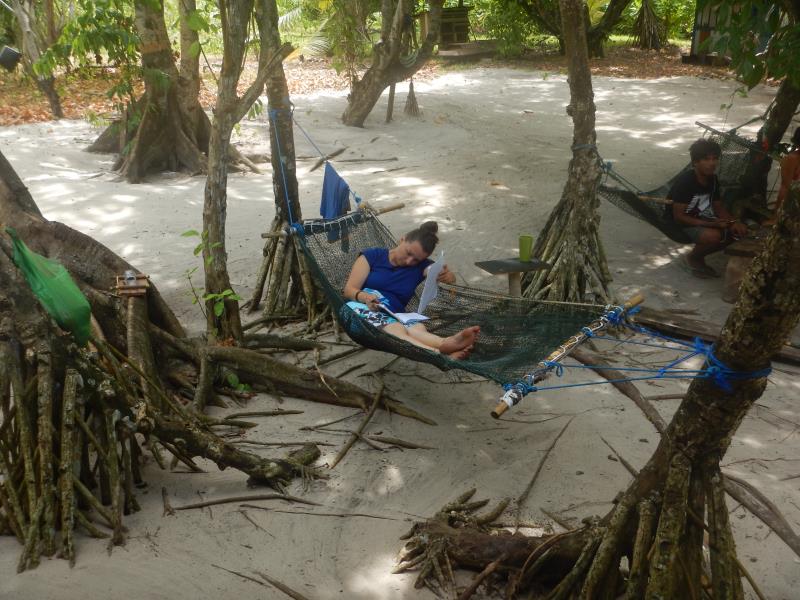 Making new wardrobe was similar with one small difference – she was again in hammock, but this time actually sleeping (which I really cannot understand, as cutting the wood with saw and hammering nails just next to her ears was pretty noisy) 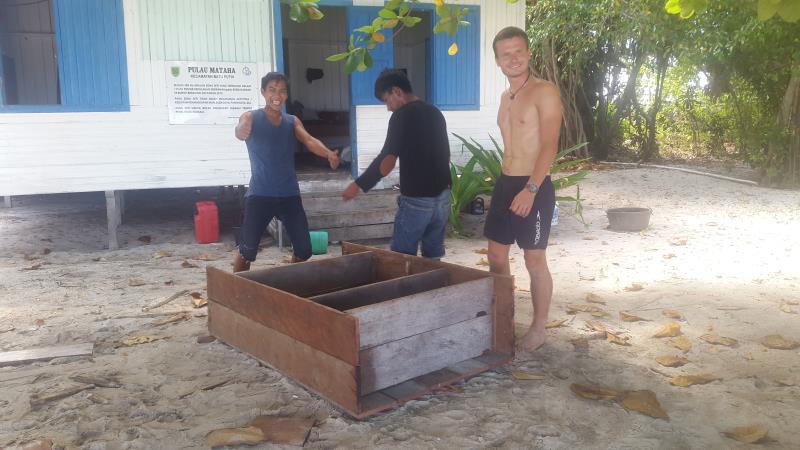 How much to pay for one coconut? Here it costs you climb on the palm tree and you can get as many as you want:)
Even if I am not as good as the locals in opening the coconut by machete (5times slower and the final product is kind of ugly), I still have all fingers – and that’s important if closest hospital is 12 hours by boat and another 4 hours by car!

GARBAGE:
The sea daily brings to beaches a lot of garbage, which was thrown there by us people. We cleaned the beaches to avoid the turtles getting blocked by them. Probably everybody guess that most of the garbage is plastic trash, but what exactly? Most of the garbage is plastic bottles, followed by polystyrene. Then you can find many flip flops, shampoo bottles, strings and other things. Bottles (without messages!) lead the statistics also in glass garbage, followed by bulbs. I thought 2 people can walk around 2km island and collect everything in one afternoon – in one hour we did not do more than 250 meters and collected more than 3 big plastic bags of garbage! Big wood need to be cut and burnt in order not to block the turtles coming to nest. 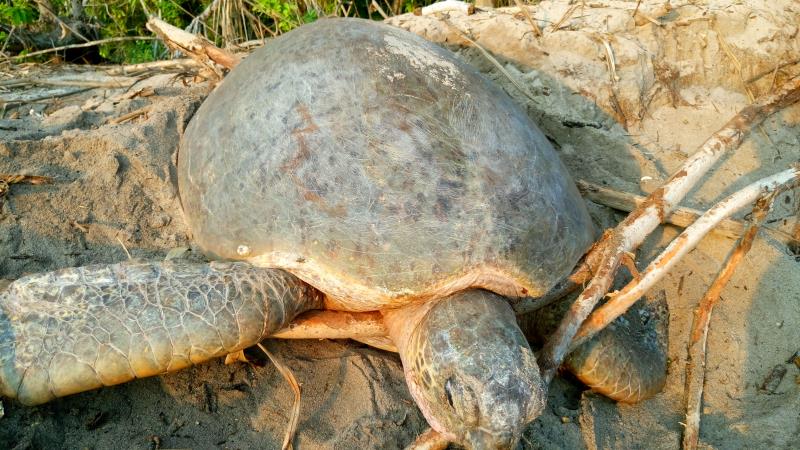 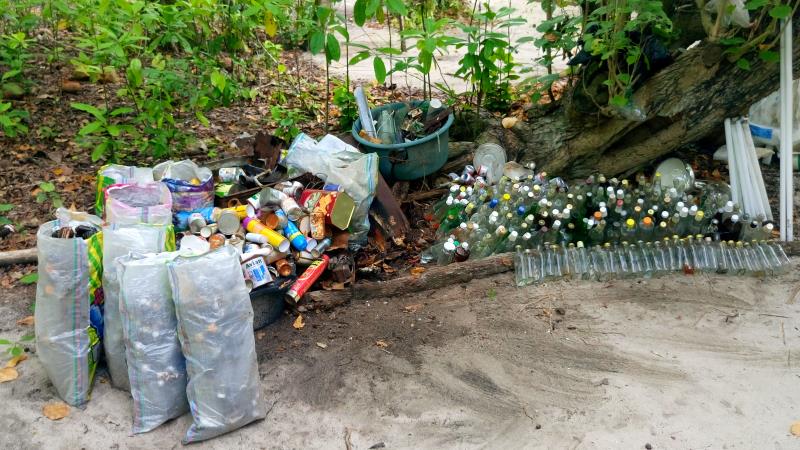 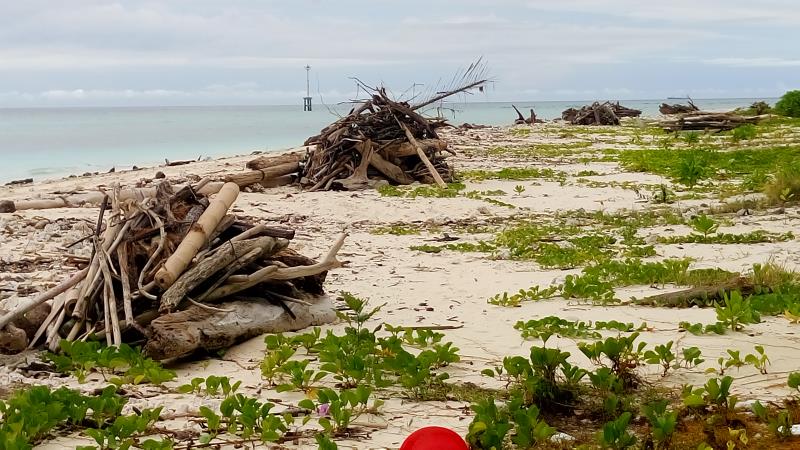 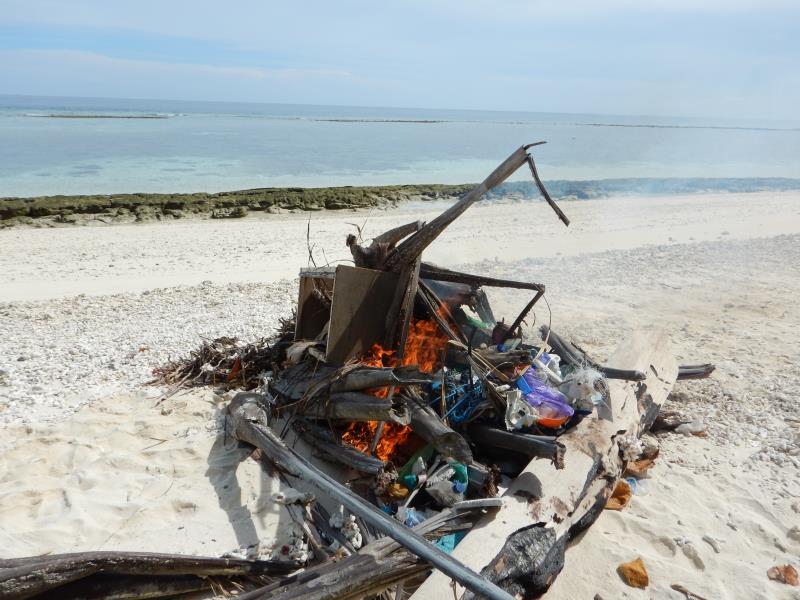 EXPERIENCE WITH EGGS RUBBERS:
First of all, there are 2 kind of rubbers:
– Fisherman who just want to make some extra money – they are interested in ONE nest and run away if rangers spot them
– Professionals who earlier lived in the islands and used to empty ALL nests they found, eggs were then daily exported by boat. When they discovered rangers hidden eggs in protected area, they threat them with machete! Nowadays they got used to the presence of rangers and coming to steal at night, but if they are caught by rangers, they again do not hesitate to fight

BOMB FISHING:
Fisherman in this area (national park => any kind of fishing is prohibited) do not care about the law and instead of net fishing, they just throw dynamite to the water and collect killed fishes. Except that explosion destroys depreciate the meat, it absolutely irrecoverably destroys the corals. This “grit” is made by broken pieces of corals, the corals where used to be millions of fishes and other animals.


Rangers actually managed to catch the fisherman directly during their bombing and even took a picture of them, but corrupted police and court decided to release them because “it’s not possible to identify them in the picture”! That is why Hana brought a drone with camera and we all hope that next time the rangers will be able to get a proof that convince the court to actually send the fisherman to jail and discourage others.
ProFauna rangers bought some fishes and after gilling them, it was clearly visible that bowels are completely destroyed by the explosion.

DRONE:
As we had to show the rangers how to use the drone, I had to learn how to use it first. Admitting at the beginning I was just trying not to destroy it, but after while I was really enjoying drone flying and the pictures from height are spectacular 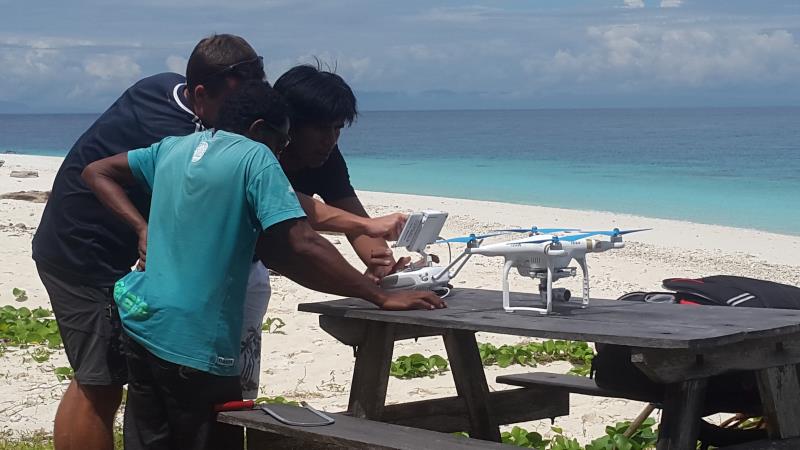 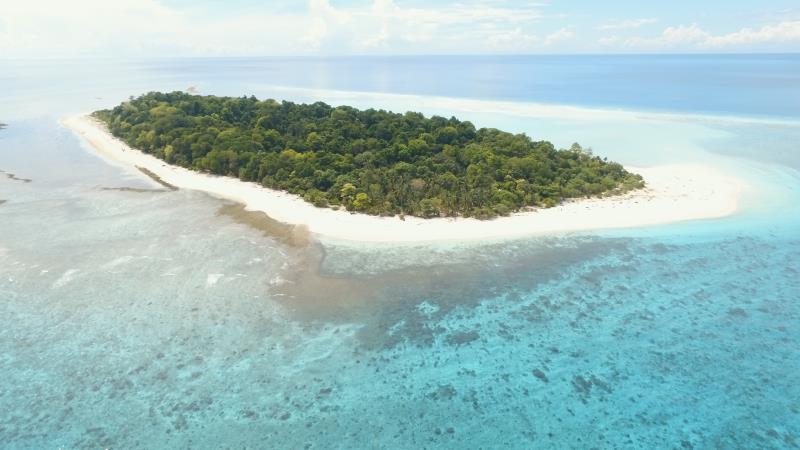 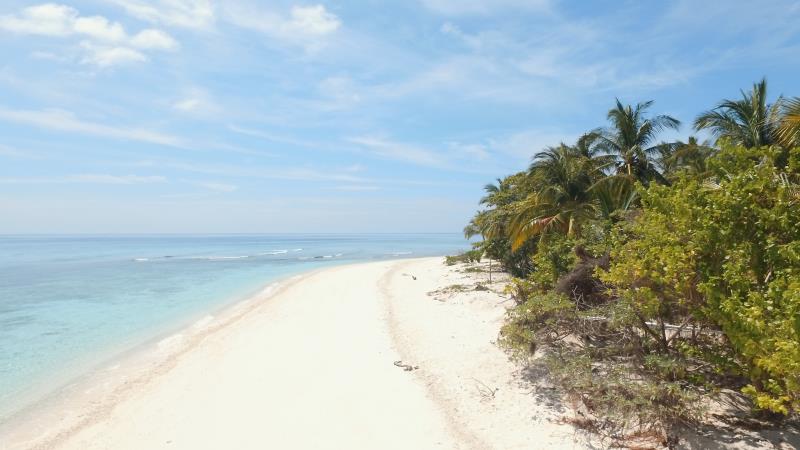 Mataha coral reel:
Swimming above coral reef in about 5 meters depth is nice, water is very clean that you can see everything and it is not a problem to dive to the ground. It becomes more exciting at the cliff, where ground goes 50 meters down. You cannot see anything except dark blue depth and even if I was never afraid of swimming, I had a respect in front of this infinite depth. 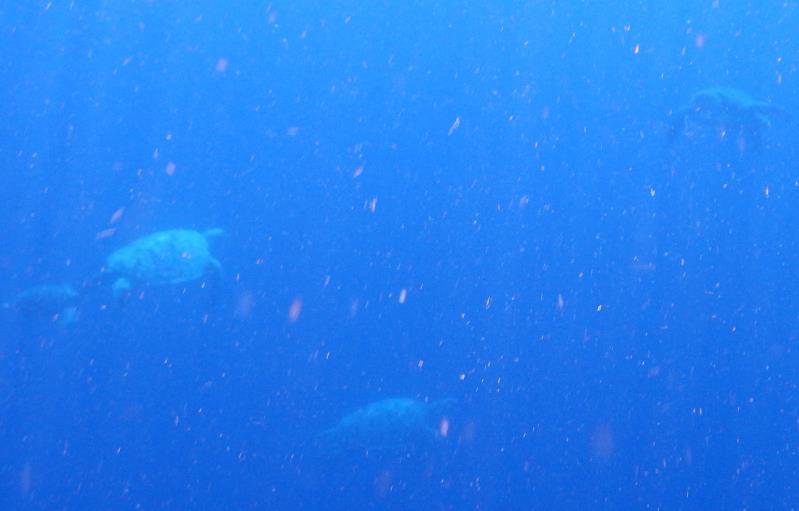 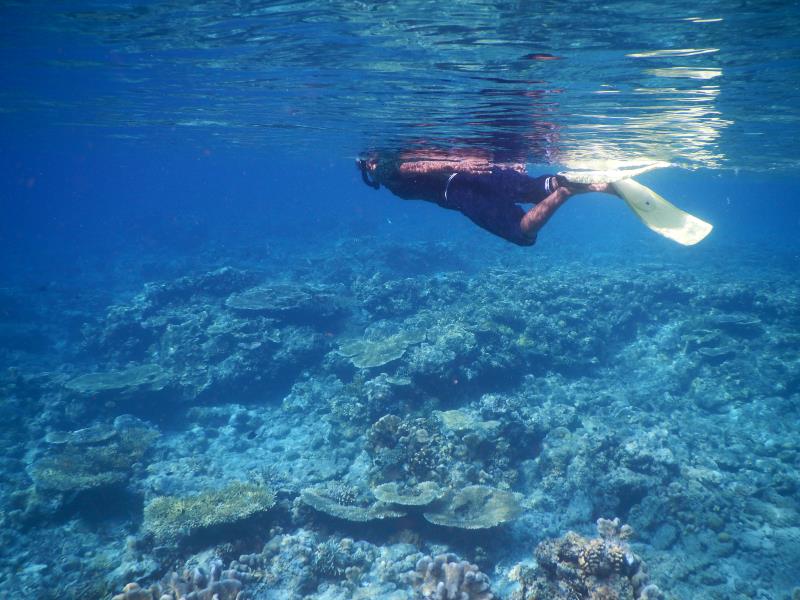 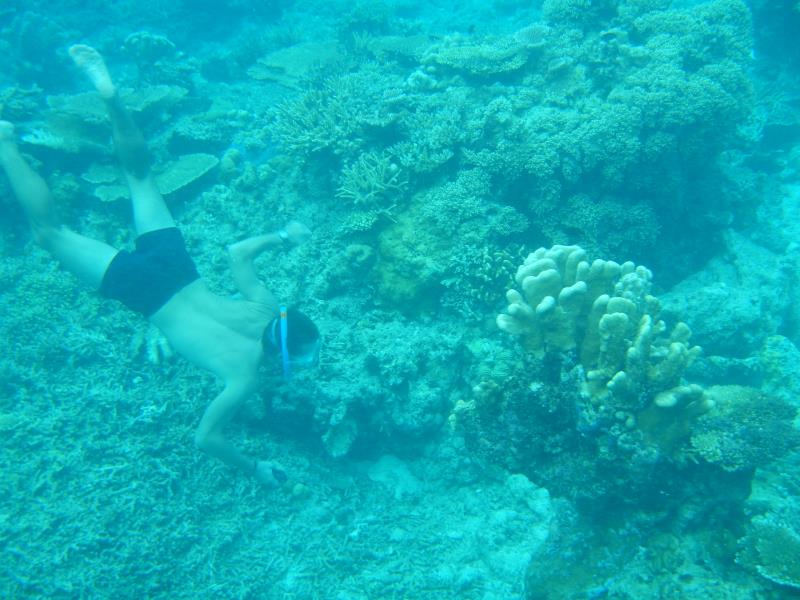 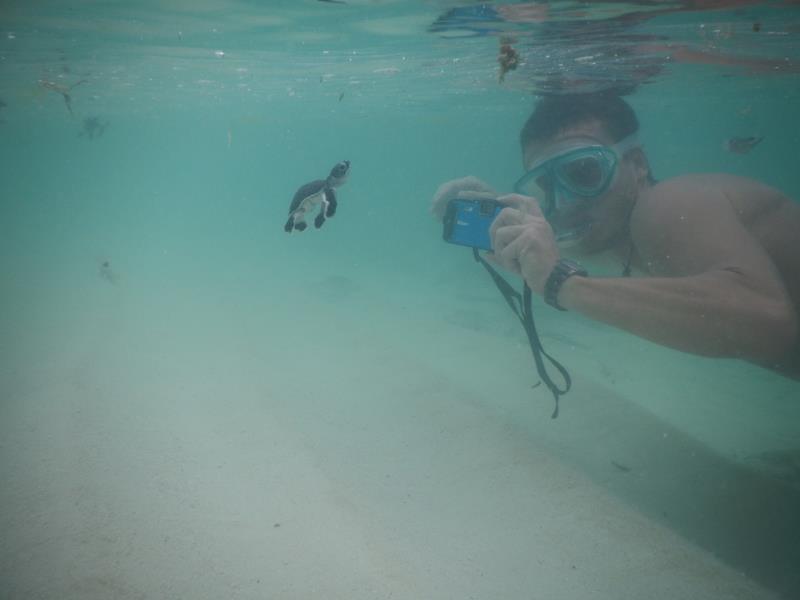 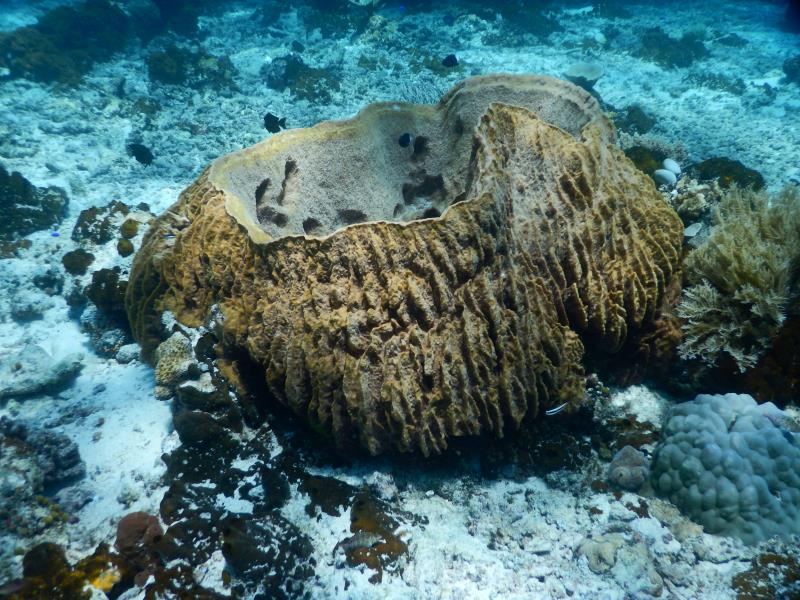 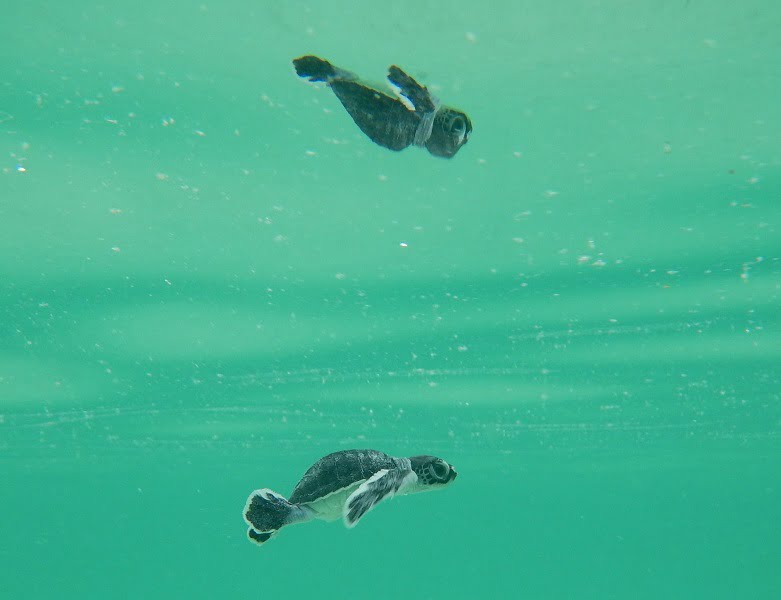 Ghosts in Mataha:
Before going to Mataha Bayu told me I should not go there if I am afraid about ghosts. There spook there at nights, rangers feel uncomfortable during night service and he prefers staying in Bilangbilangan. As I agree with Indiana Jones and believe that more danger harms from live people, I did not even think about not going there.
First night I was sleeping outside in hammock. For the first time I woke up around midnight when somebody called me by name – but nobody was around. When around 2am I saw 2 persons coming and when I tried to touch them, my hand just passed through them, I preferred to move inside the house and lock the doors 😀

Why to volunteer here? 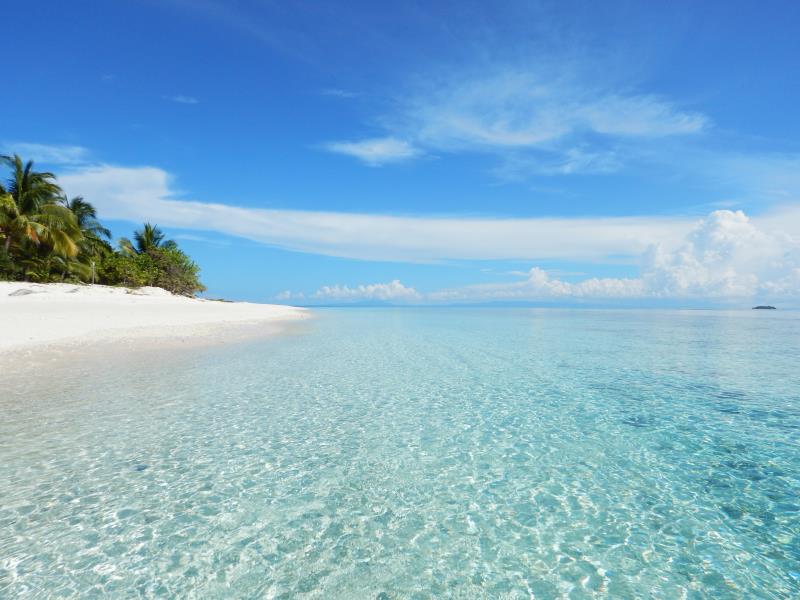 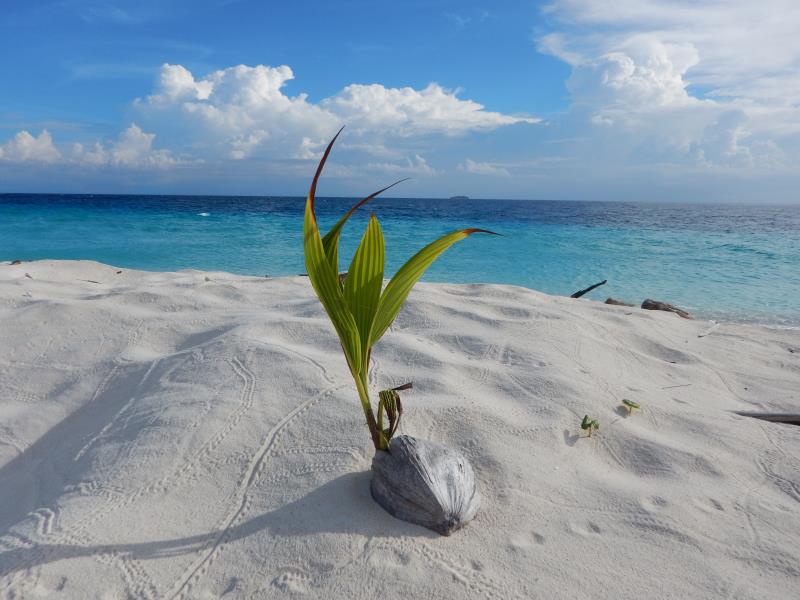 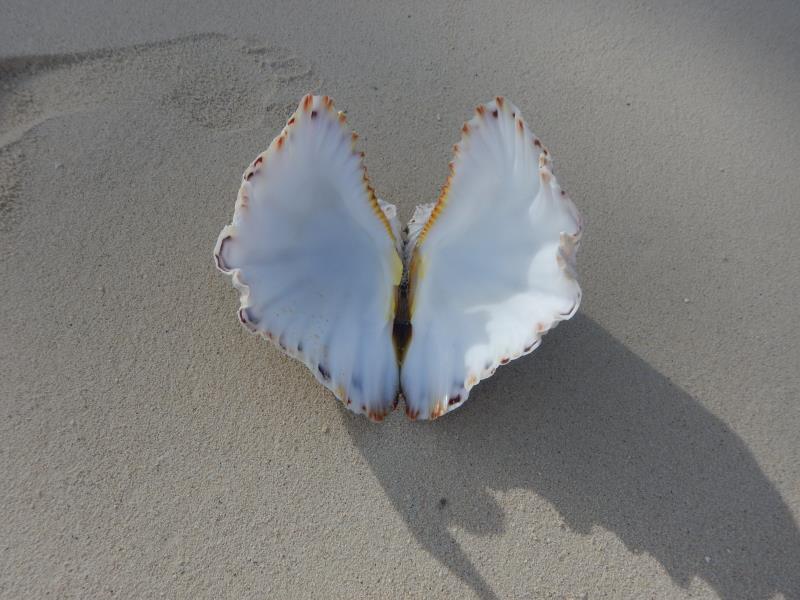 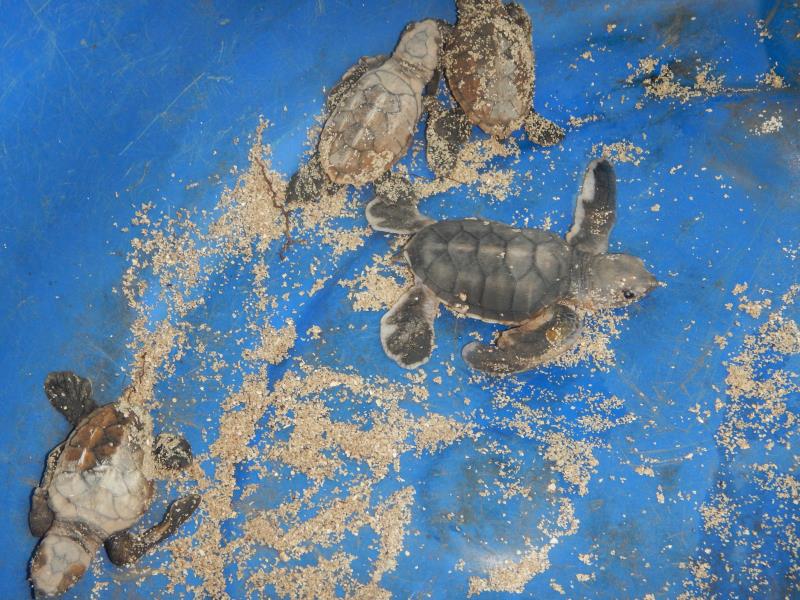 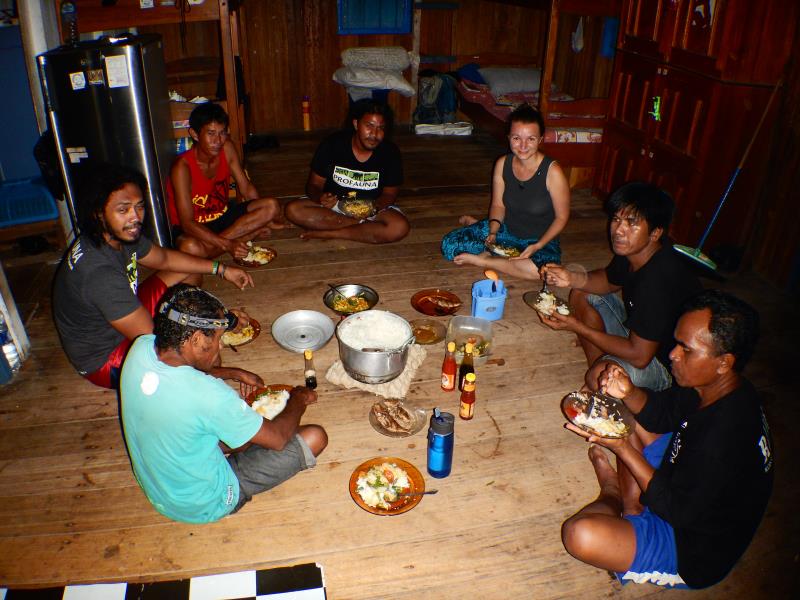 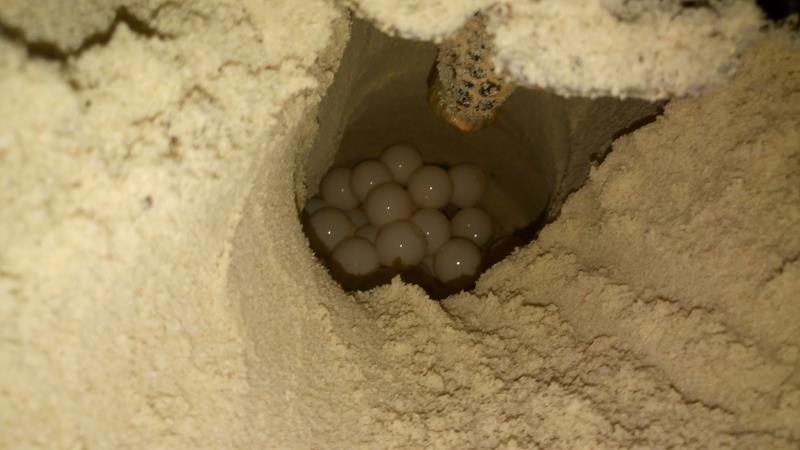 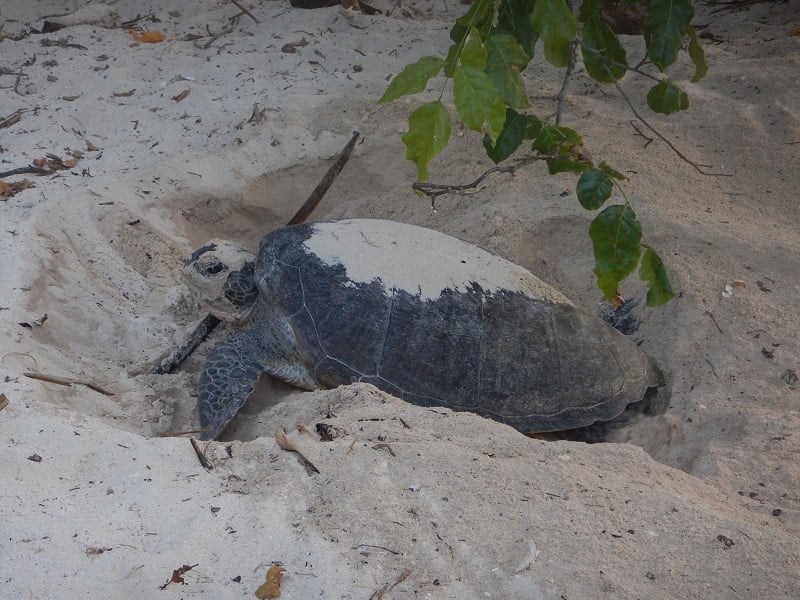 PALM OIL:
Palm oil is the cheapest in the market and therefore the most spread. It is used in basically everything – for frying, in chocolate, or in cosmetics, etc.
Problem is in the way of getting new pal plantations. Tropical forest in Borneo is either grubbed or burnt and nobody cares about killed endemic animals. As international agreements prohibit selling jungle to create plantations, workaround is simple: international corporation employees give some money and fuel to poor people who then set a fire in the forest. And burnet land can be sold without any problem!
Plantations do not even help locals with unemployment – modern “slaves” are brought from different places and they only get some extra money for killed orangutans!
There are more options how to fight against this business – there are certificates proving that oil is coming from “nature friendly” plantation, eventually that products (restaurants, school canteens, etc.) do not use palm oil at all. There are some discussions in EU how to handle this issue, but only France actually does something so far – there is high tax for importing palm oil to France and as this is not the cheapest anymore, it forces people to use different oils.
Even if governments might be setting rules, each of us can help our own way – it depends only on us if we consume products with palm oil or not and supporting this bloody business. 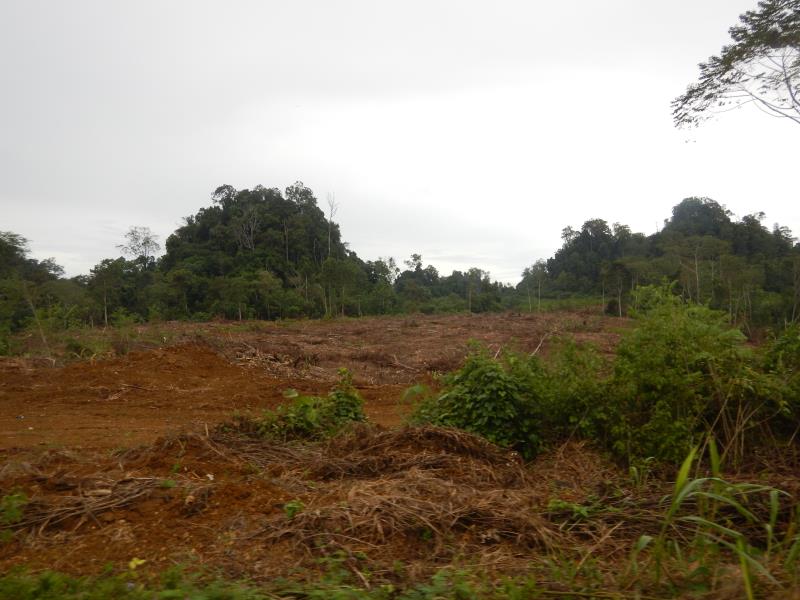 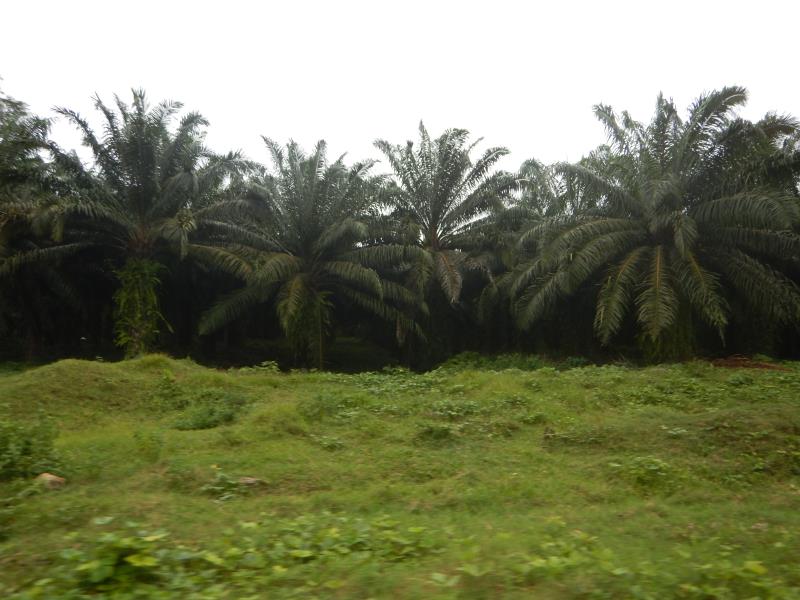 At the end I would like to add big thank you for both my sponsors:
In the islands there are many mosquitos and some might transfer Dengue fever. None flew to me when I was protected by repellent Predator produced by Czech company Leroy Cosmetics
Headlight Coleman with infrared light given to me by www.outdoor-a-sport.cz was really useful during night work with turtles – they are distracted by normal white light, but they can stand infrared.