I have to admin I have had more enjoyable flights than this. All night in planes without sleeping, arriving at 5am Malaysian time, but would be 10am for me (New Zealand time), not a great start.

Fortunately I found great CS host Rowena, who made my day. She loves backpacking, diving, climbing etc., so we really had something in common.
She is from Iban tribe in Borneo island and knows a lot about Malaysia and especially the stories from her home are amazing. Where to start? Her people Sea Dayaks from Sarawak used to be (hopefully) hunting people, killing them and keeping their skulls as trophies – that could explain why sh doesn’t have any CS reference 🙂
She used to have Cobra and a python as a pets. She was really surprised discovering that not all children have snakes as pets when she came first time from school. She also confirmed that the story about python lieing straight next to a person is not just a joke, but reality – has happened to her too.
In Malaysia there are many states and each time sultan of one state is the actual country leader (doesn’t really have any power, e.g. Queen in the UK)
As there are so many different tribes and so many different languages, English became language number 1 for most of the people to communicate with each other – and therefore English level is really high. On the other side some people do not know Malay language.

In the morning I took a nap and in the afternoon we went together to Batu caves. As it is Deepavali Hindu festival today (it is actually tomorrow in India) and Batu caves is Hindu temple, there were many people who came for prying, which made the visit even more special. The limestone cave is nice and really huge and many monkeys make your visit spectacular. 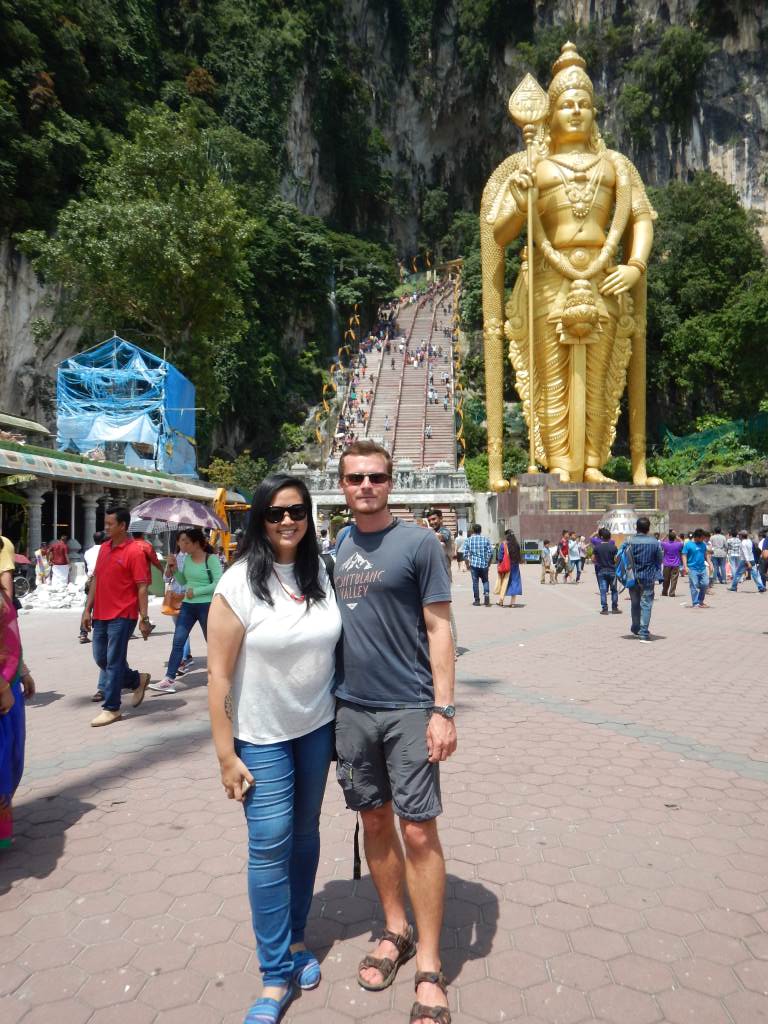 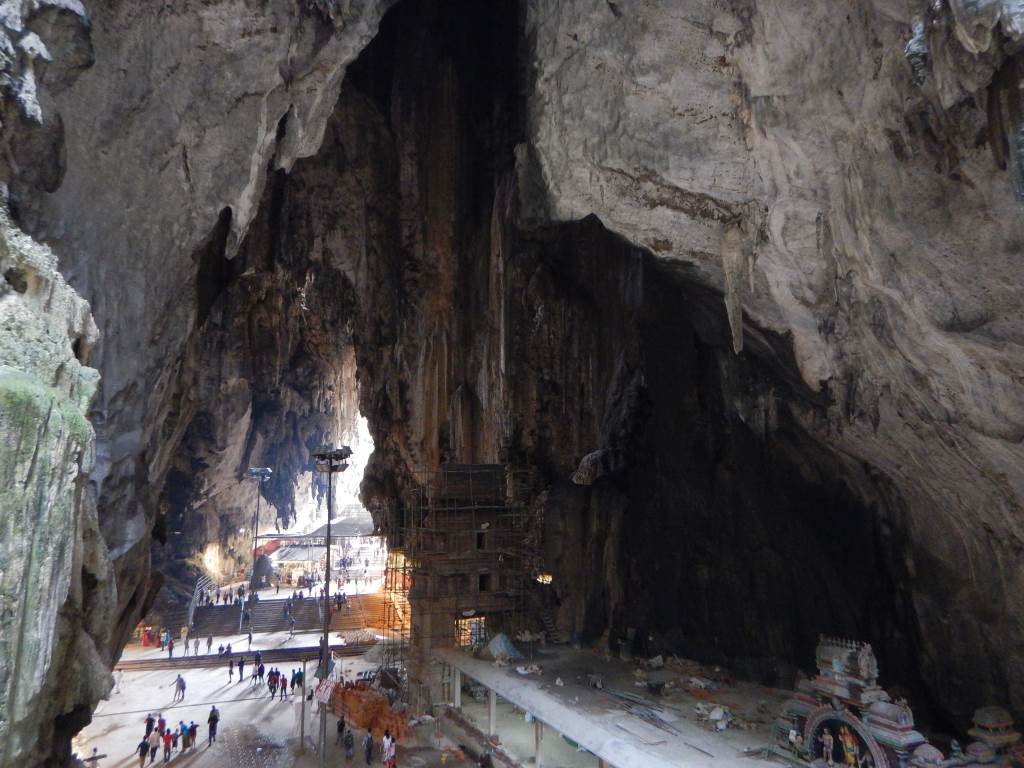 Then we went together to city center. In Chinatown I tried typical food, central market shown us all possible gods to buy, Clock Tower is something like Big Ben in London and River of Life is a place where 2 rivers are merging into one, currently being renovated and looks very nice, same as Independence Square. 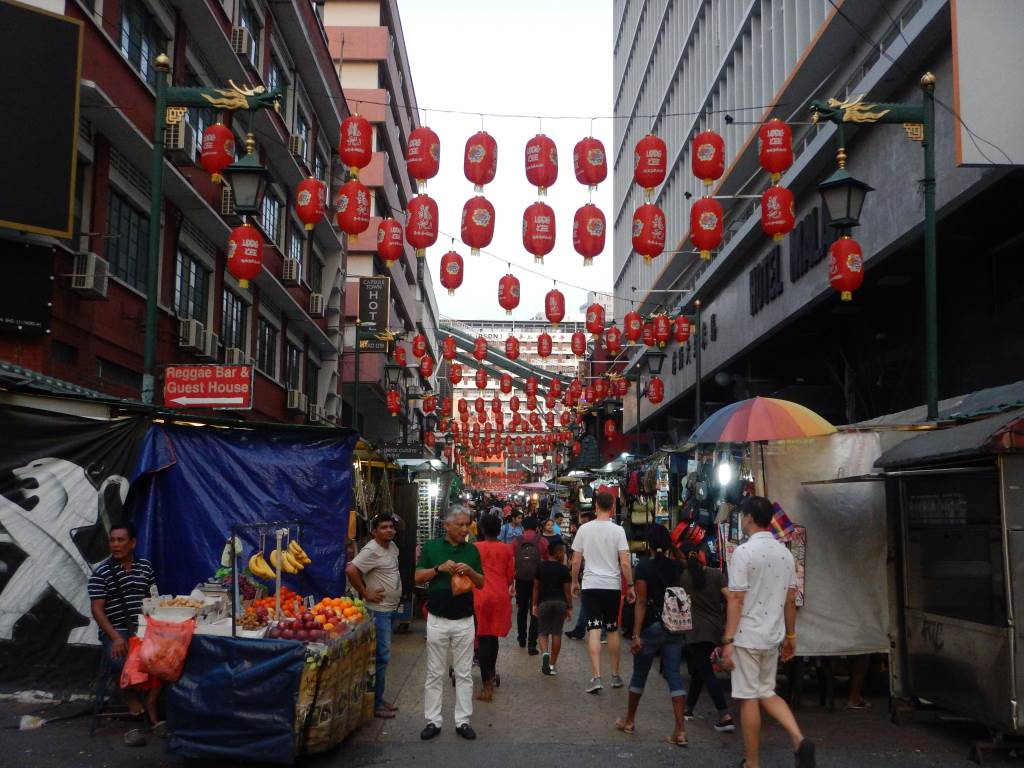 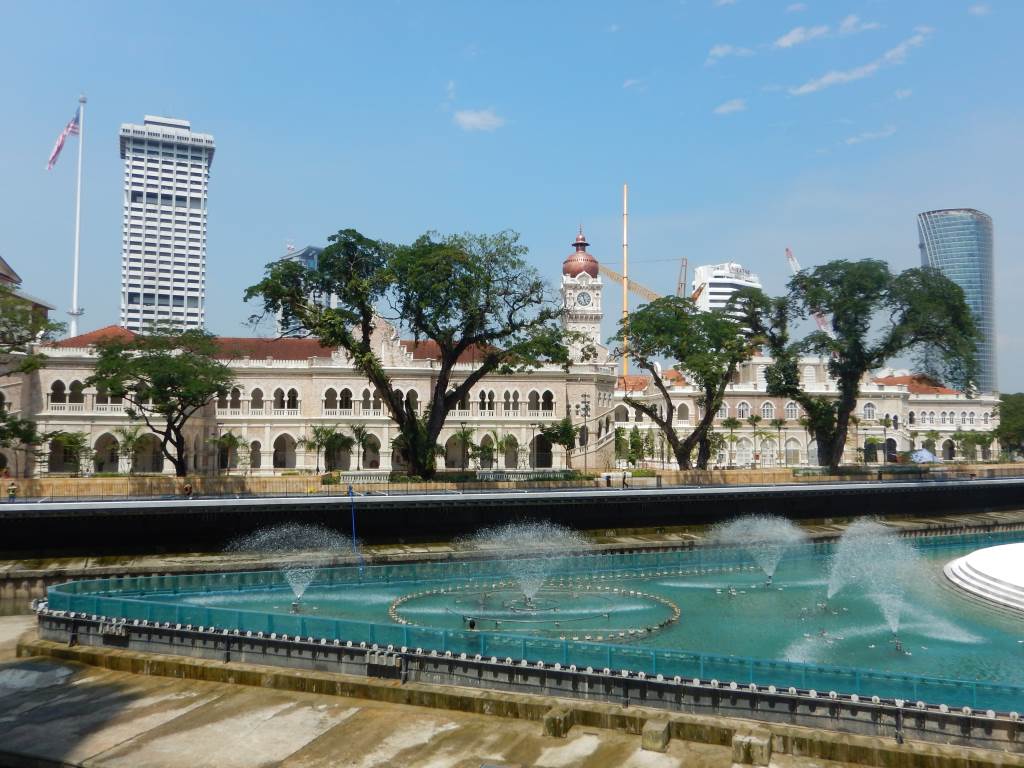 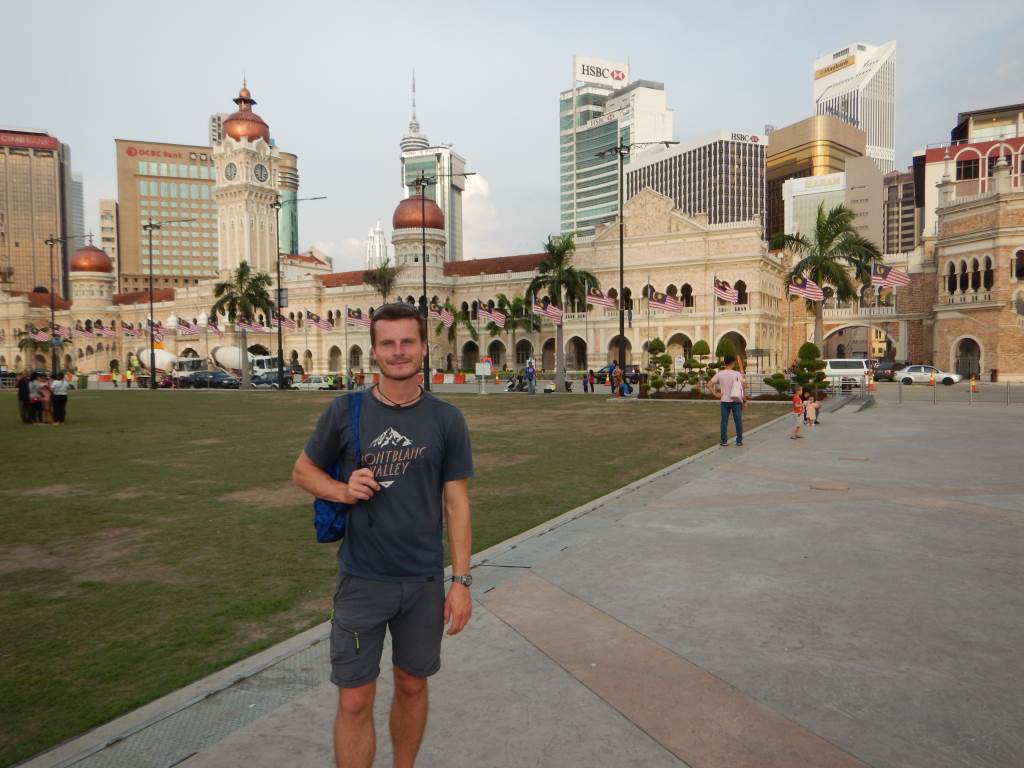 In the evening Rowena was invited to Deepavali dinner at her colleague house and took me with her – well I really didn’t expect to come to a genuine Hindu party the first day in Malaysia. There was loads of delicious food, but I immediately did huge mistake with using left hand, I completely forgot it is inappropriate 🙁 All people were of course eating by hands, but as I got offered fork and spoon I accepted them – but that was another mistake and everyone started asking why would I be using them 🙂 After dinner there were home made sweets, wine for drink and fireworks to watch. Best was the daughter of our host – she would like to go backpacking, so wanted to talk with me – and after talking together for like 2 minutes she went to her mom with words „mom, I already know everything about backpacking, you have to let me go“ 🙂 The atmosphere was really good, but I slowly started falling asleep (11 pm local time, but 4 am NZ time with no sleep last night), so we headed home. I was happy that for me was not necessary to follow local rule – when somebody is leaving, the youngest of the group need to show respect to hosts by kissing all remaining people 🙂 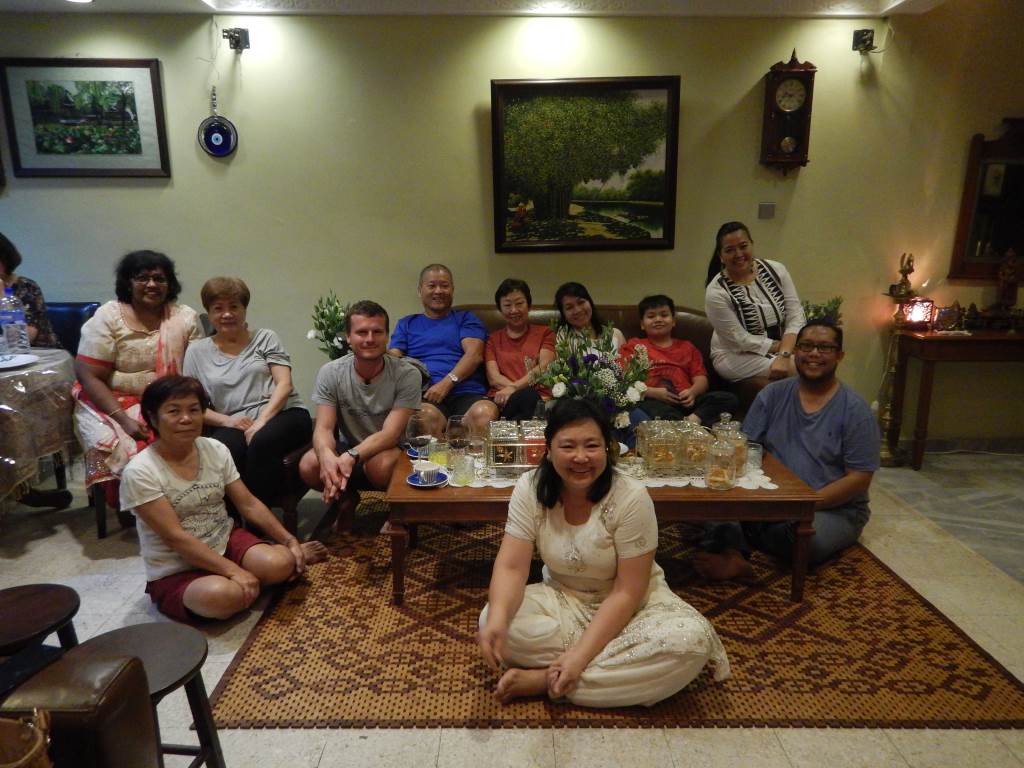 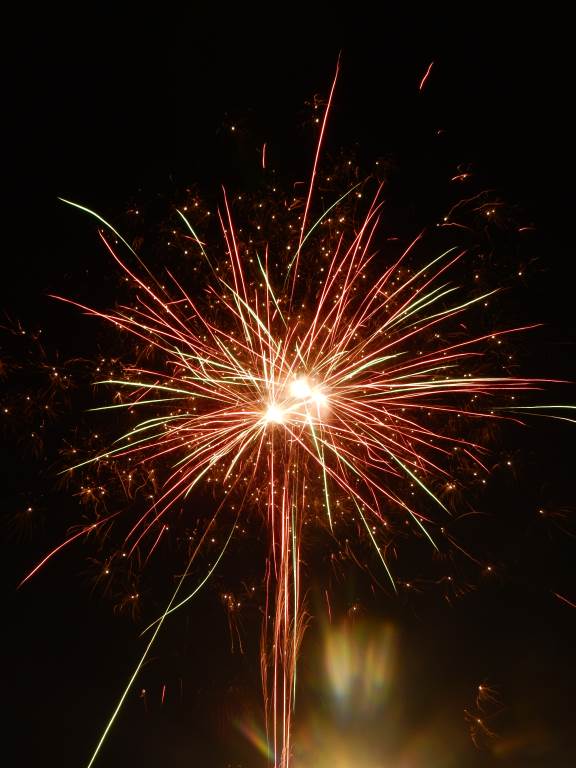 In the morning I just relaxed around roof top swimming pool – could there be better way of travelling than couch surfing? 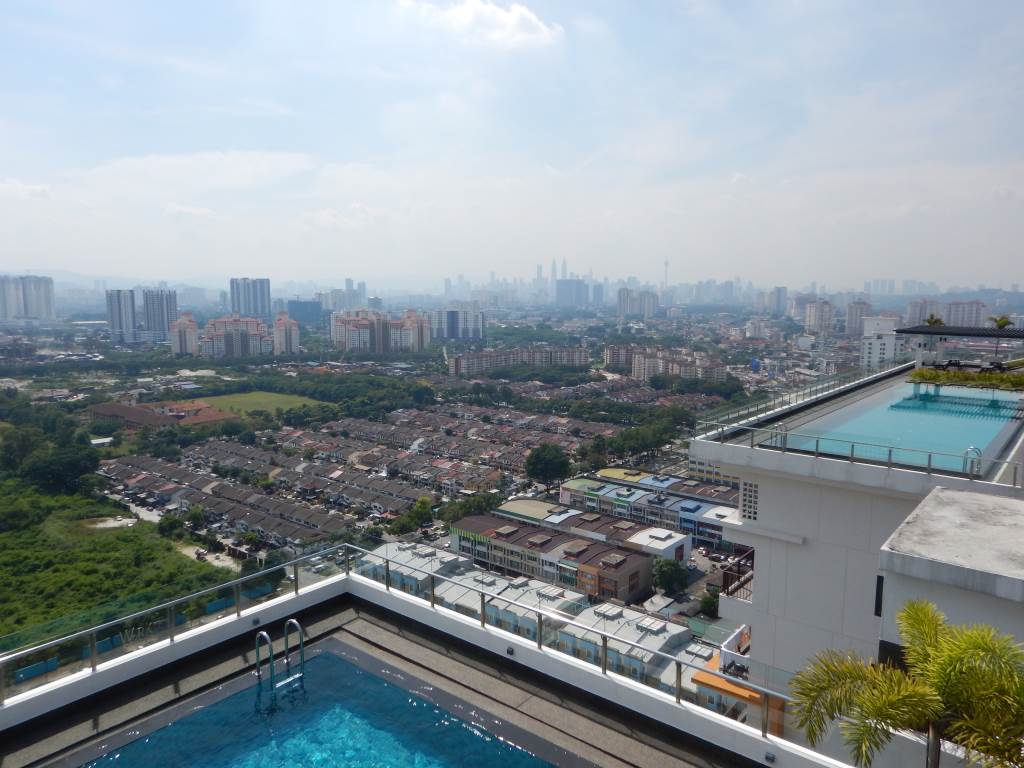 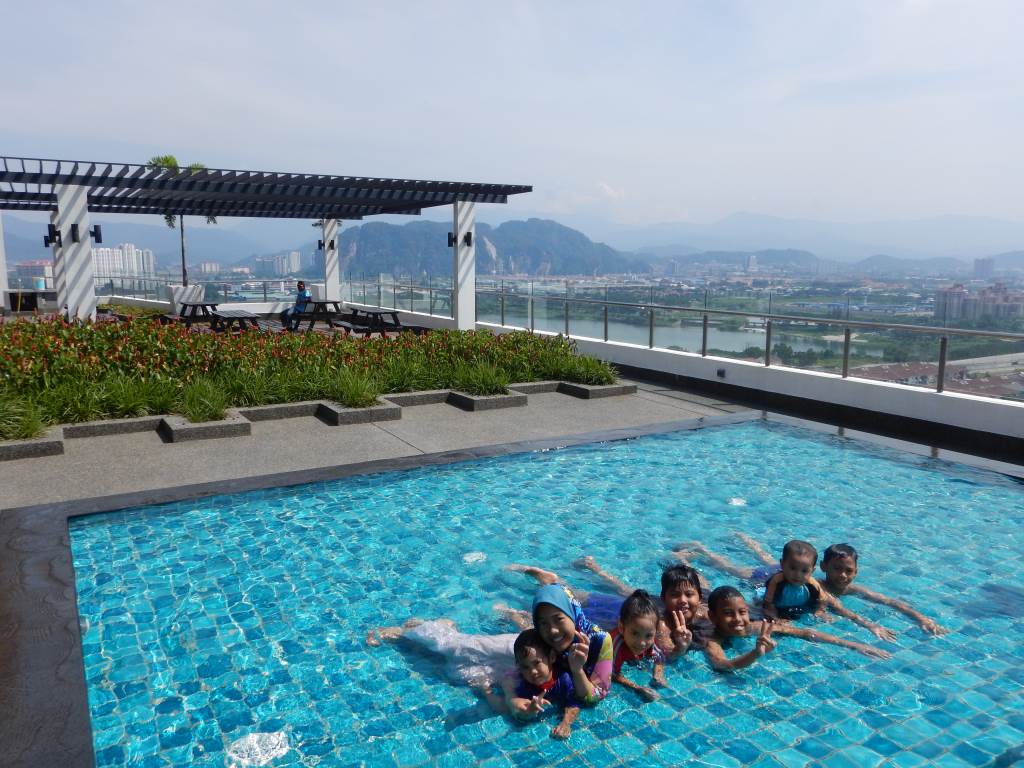 In the afternoon I met another friend from 2009 camp Nesher. With Adeline we met at KLCC and she explained me why she moved from London back to KL and talked about her decision to quit job and joining art university.
For Deepavali festival there are many „kolam“ all around (especially in malls) – very nice pictures made by colored rice.
Petronas Twin towers have 88 storeys each tower and are 452 meters tall. Sky bridge is 58 meters long and it is in 41st and 42nd floor at the height of 170 meters. 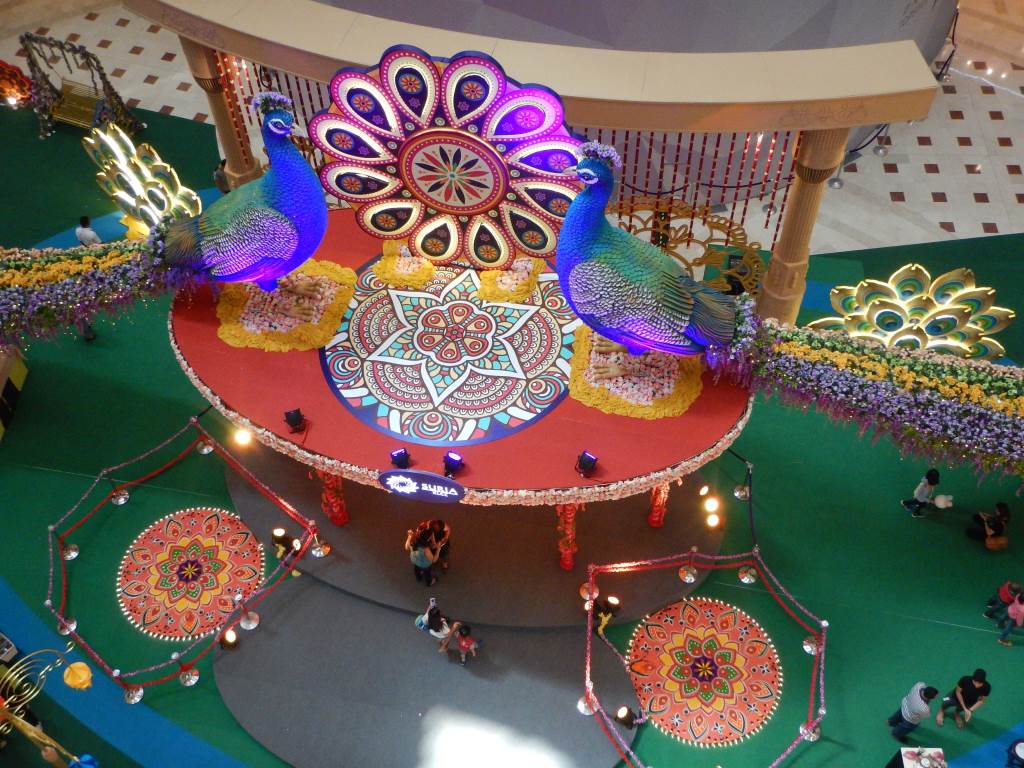 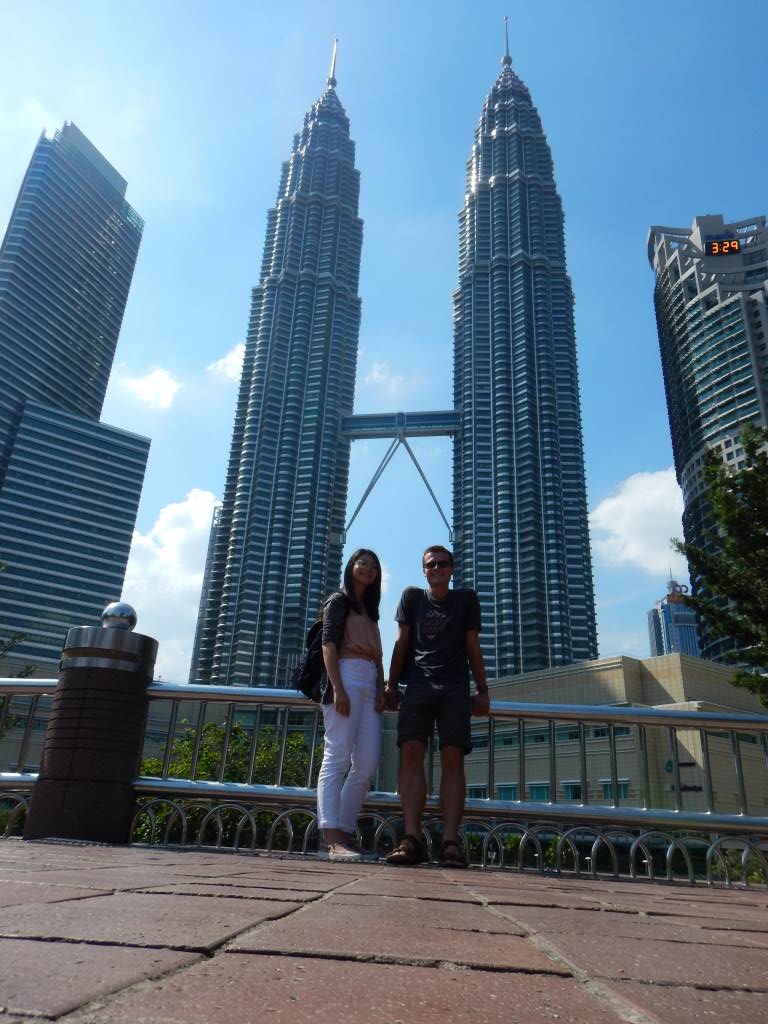 As Rowena had to go to Putrajaya (quarter/suburb of Kuala Lumpur full of government buildings) in the afternoon, I joined her. The center is on an island with 5 bridges all around.

At Putra Mosque for 15 000 people we had to wear beautiful „Harry Potter“ / shaolin robes and enjoyed here also sunset. 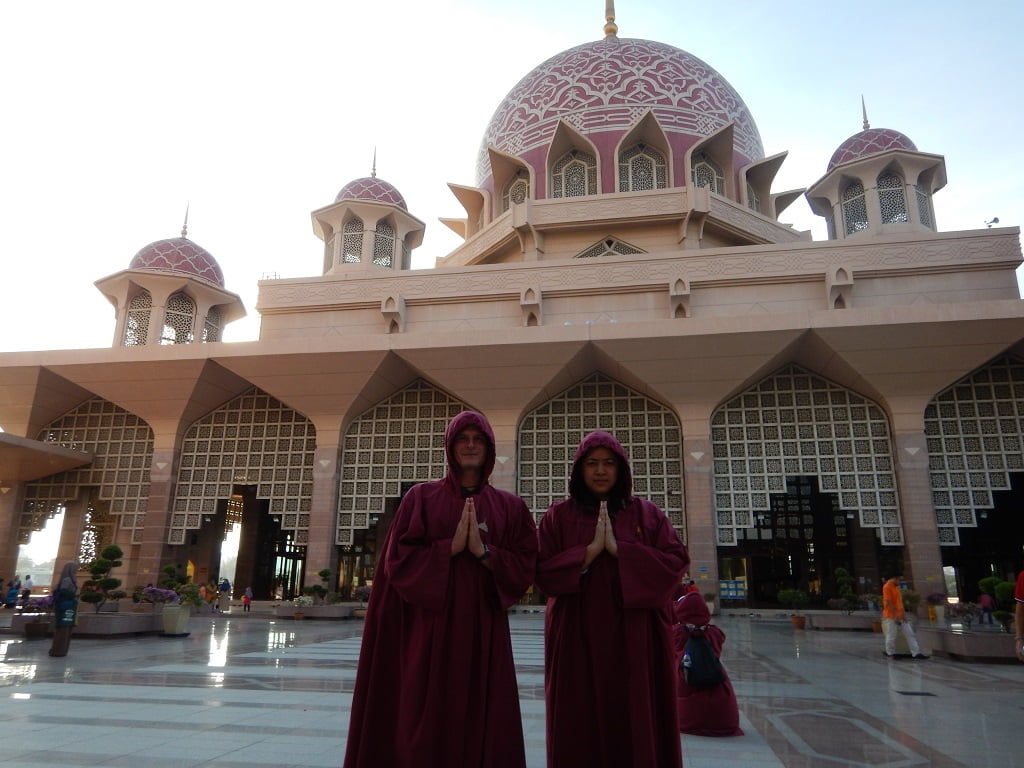 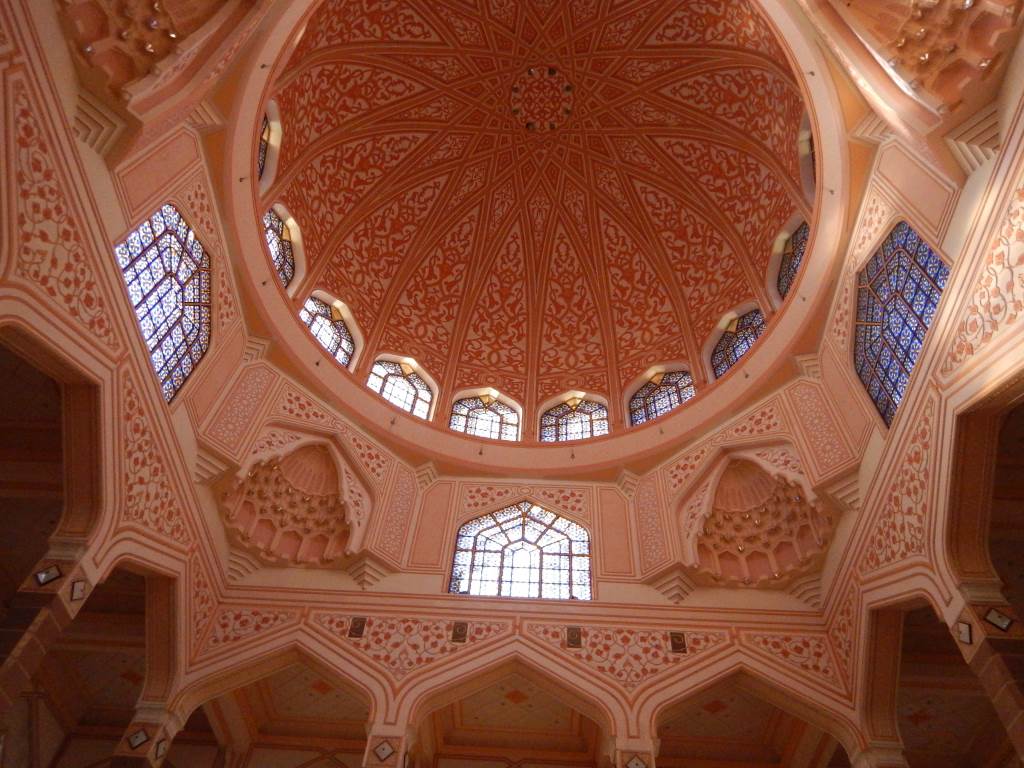 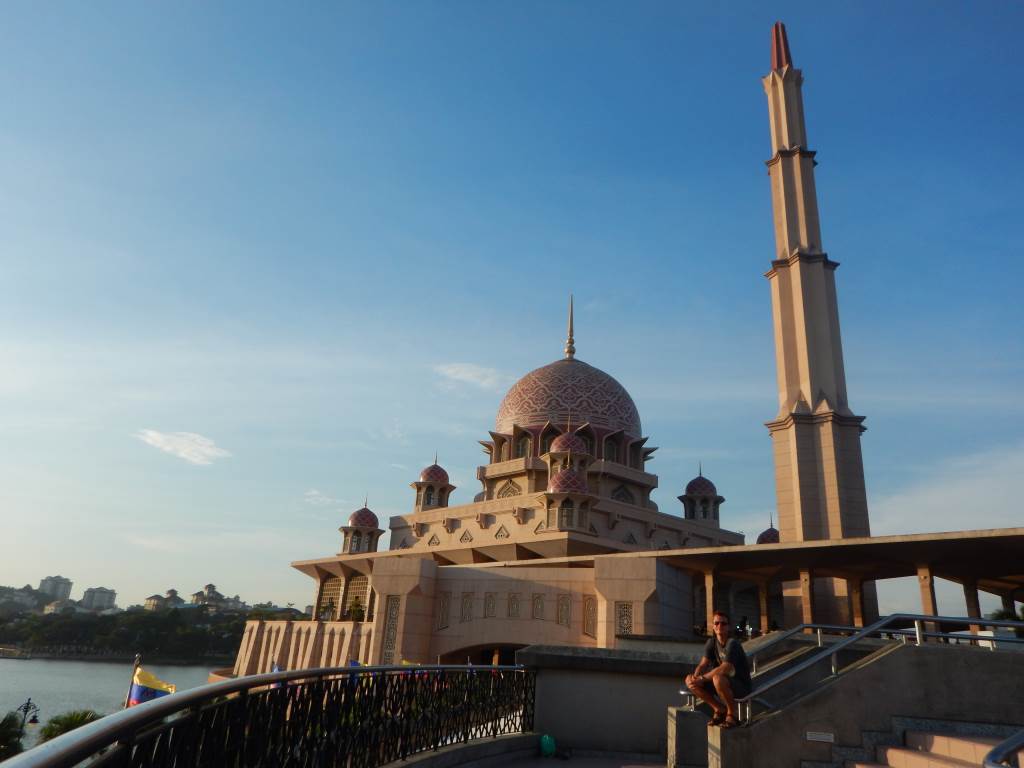 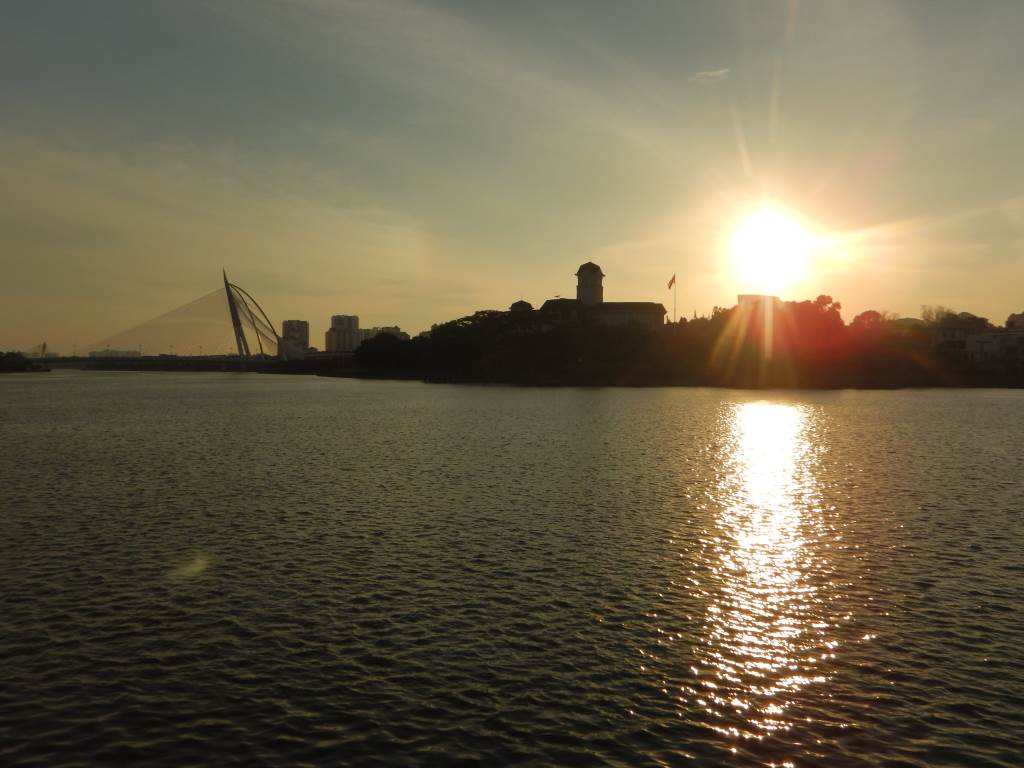 After sightseeing we went to visit her friend – working for government, currently not working but studying (still being paid as if he was normally working)
He and his wife are both from Borneo, but different tribes, so speak different languages. It was nice to see them speaking half sentence in English, half in local language and some words in Malay – I could not understand anything, just stared at them how good they are with languages.
She just came back from Borneo where she went to deliver their baby. Borneo people are privilaged and if baby would be born in KL, it might be very difficult for him/her to have a land in Borneo in future. So all mothers from Borneo are going to give birth back home, independently where they live currently.

In the morning Rowena took me for breakfast to Kampung Baru – last remaining village in the middle of KL. This is protected area with traditional living style and even if there are developers who would like to destroy those wooden houses and build skyscrapers, I hope this village will remain for as long as possible. 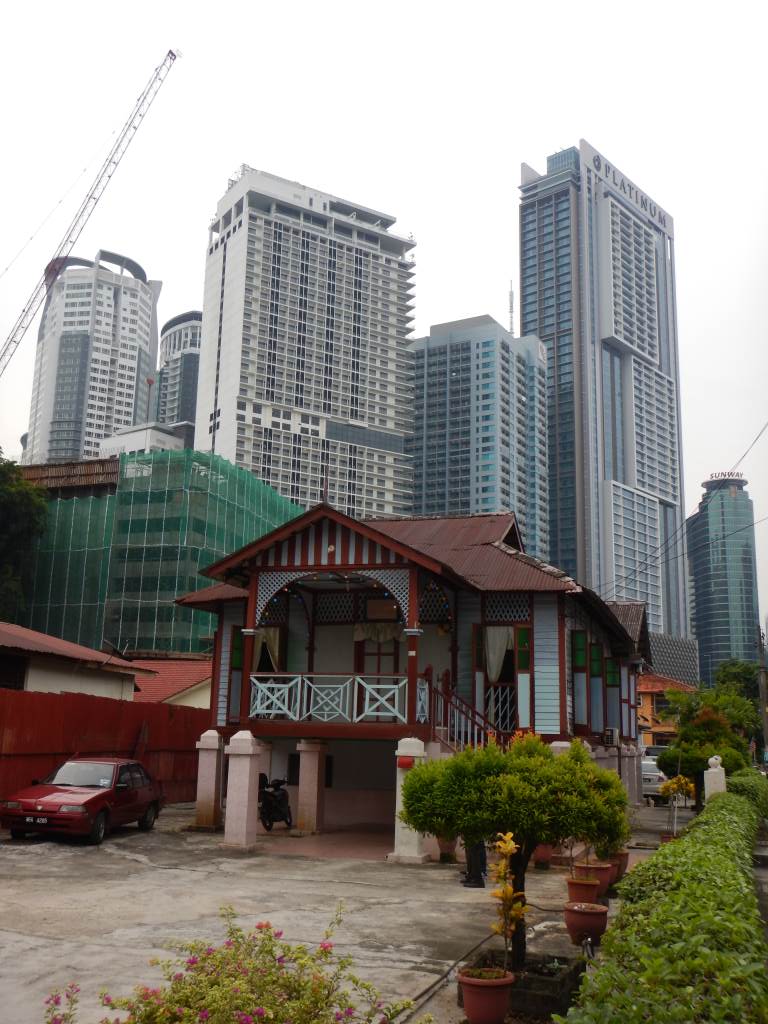 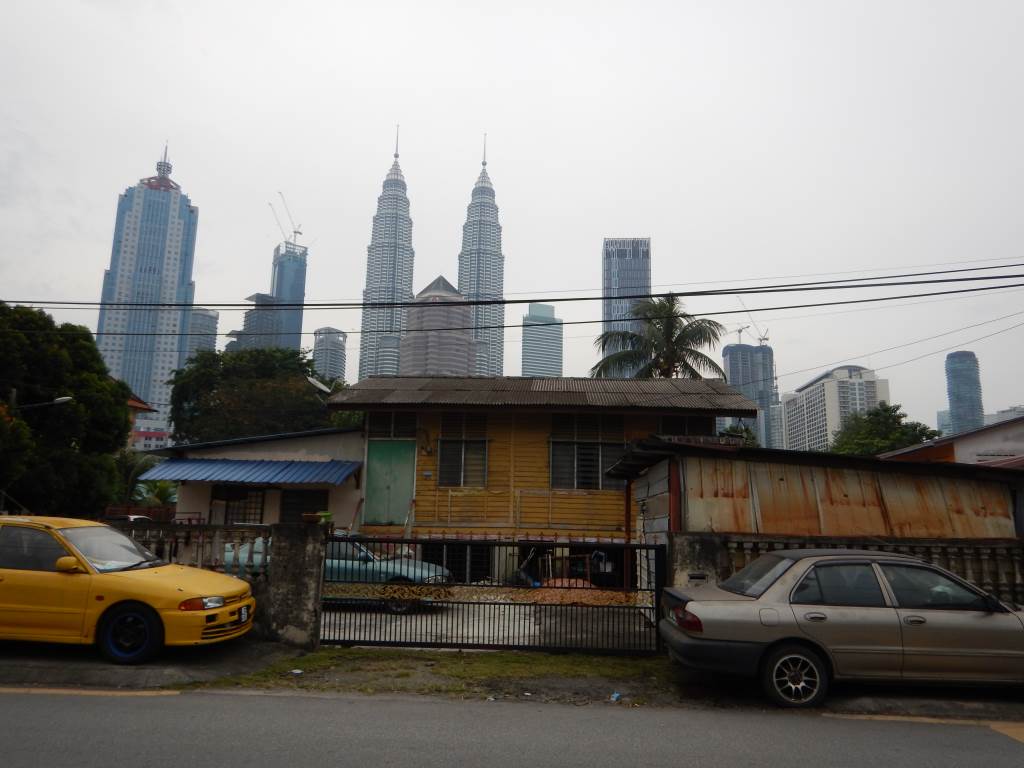 From there I got to KLCC park, enojyed the view on Petronas Twin Towers and found Malaysian geocache.
Unfortunately I discovered too late that walking around the city with heavy backpack is not a great idea. By the time I got to party place Bukit Bintang I was completely tired.

To rest for a while I stopped in telecommunication museum – just to learn that messangers were used already around 1300 CE and only high intelligente people with exceptional memory and outstanding endurance and stanima could become messanger. Modern times are different – when Kuala Lumpur tower was built in 1995, it was third highest telecommunication tower in the world. 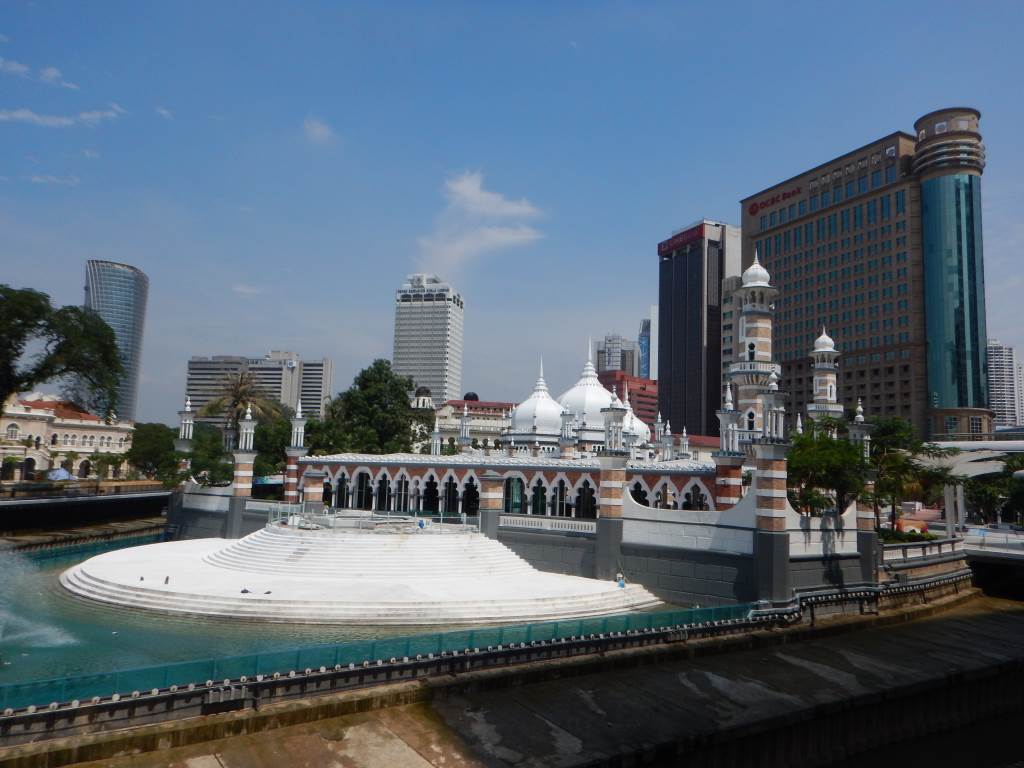 Walking in the park was much nicer than being in the city and I enjoyed especially Orchid Garden. Meeting varan in the city was quite unexpected and scary, but it was scared more than me and run away quickly. Finally finding a bride was way nicer, unfortunately her groom did not share the idea of me taking her away… 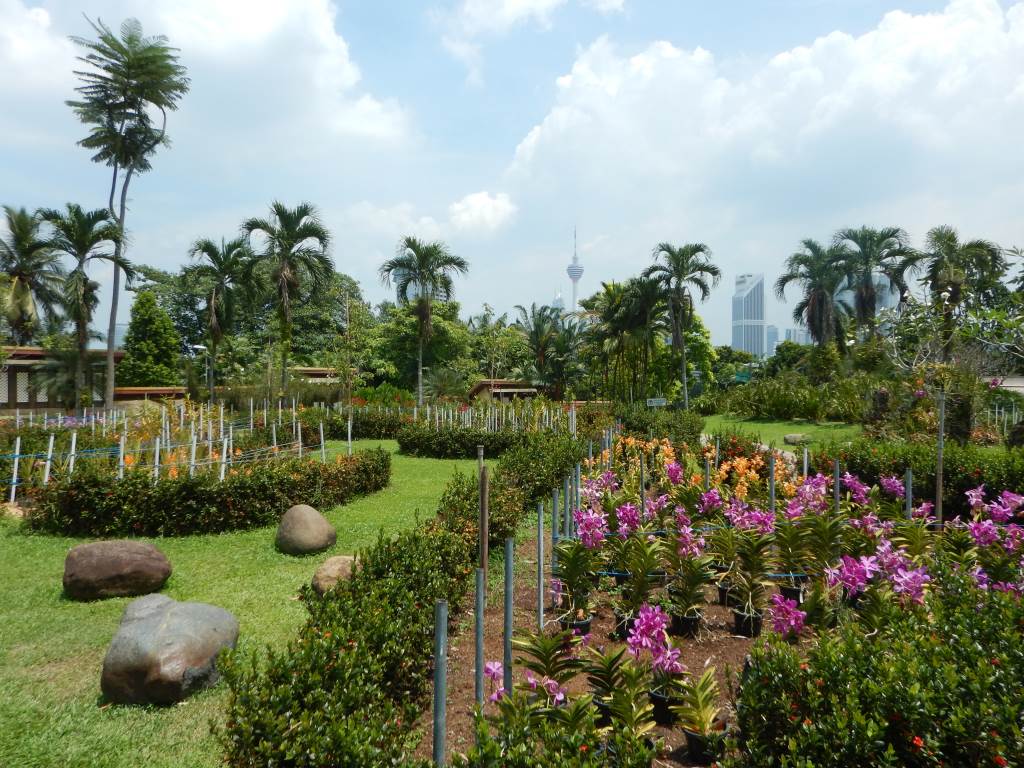 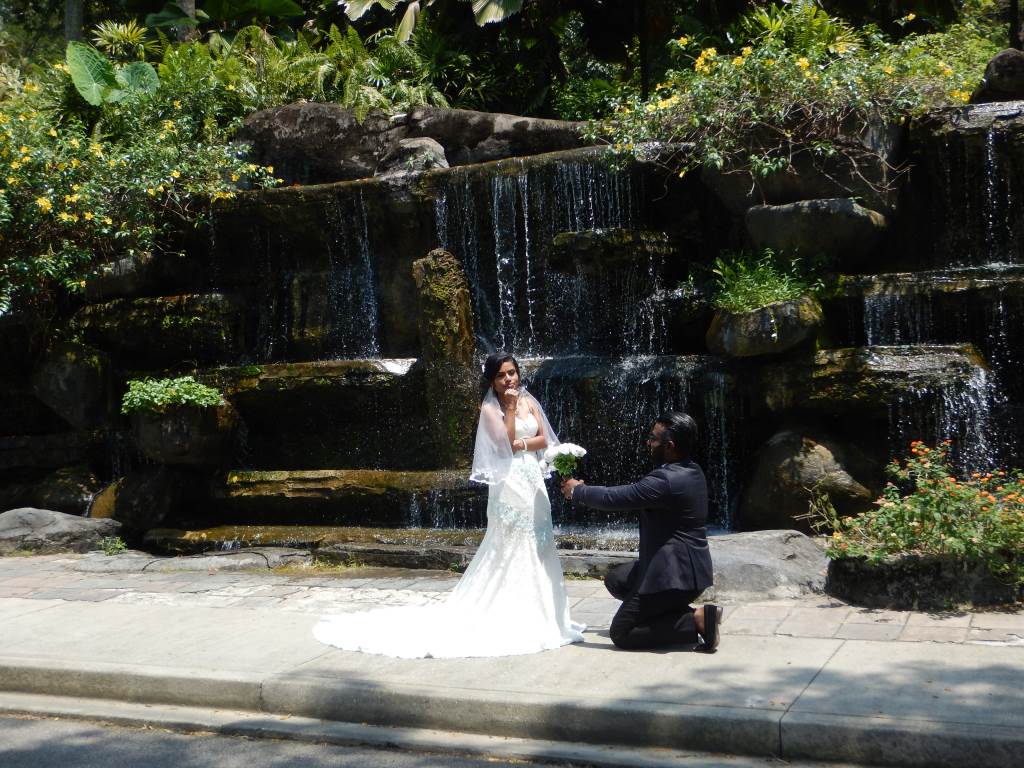 Already on my way to bus station I spotted impressive building of National Museum, which I could not miss when I was so close. I liked the exposition of various tribes costumes and learnt for example how to get rubber from gum tree and that Malaysia gained independence in 1957.
For me as a sport fan was really interesting temporary exhibition of Kuala Lumpur games 2017 – South East Asian countries have their own small „Olympic games“ called SEA Games and it is interesting to know that from 1995 to 2009 every time the country that hosted the games also won most medals (except small Brunei in 1999) 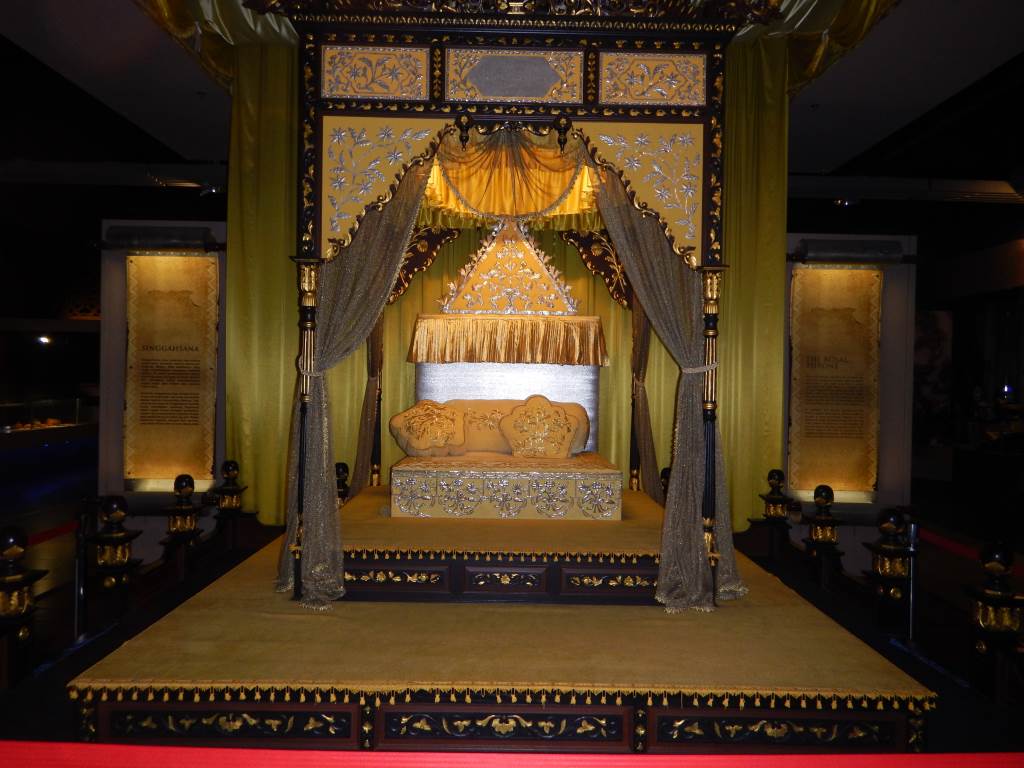 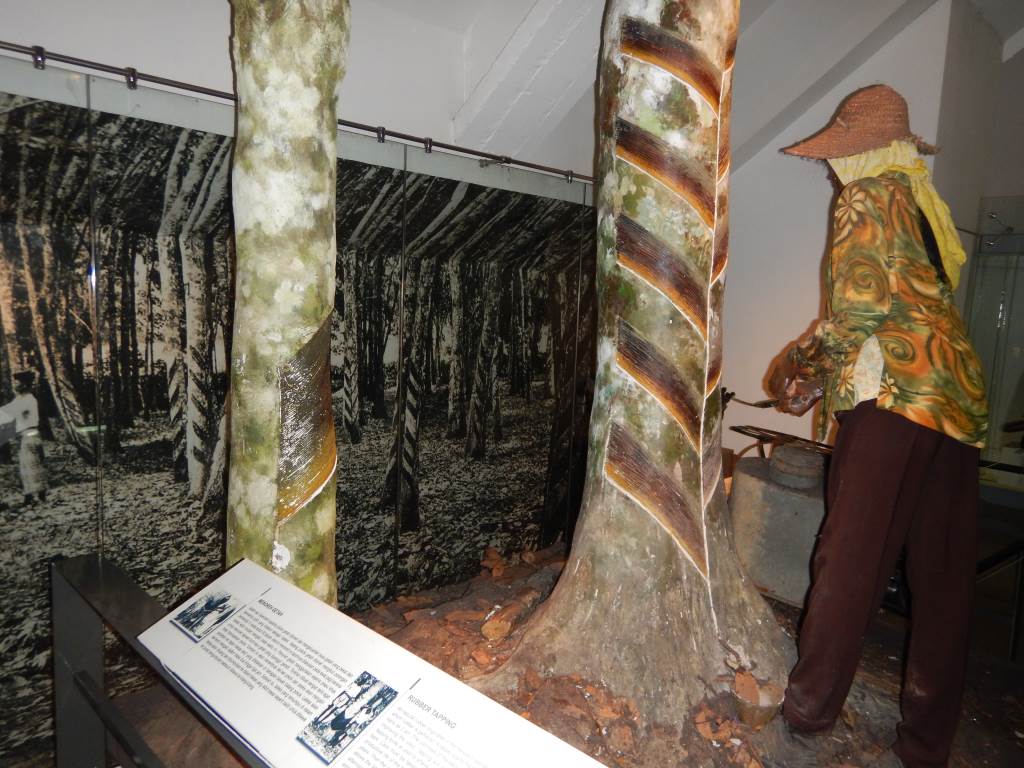 Last but not least on my KL list was National Mosque and Old Railway Station building, from where I took bus to Penang island. 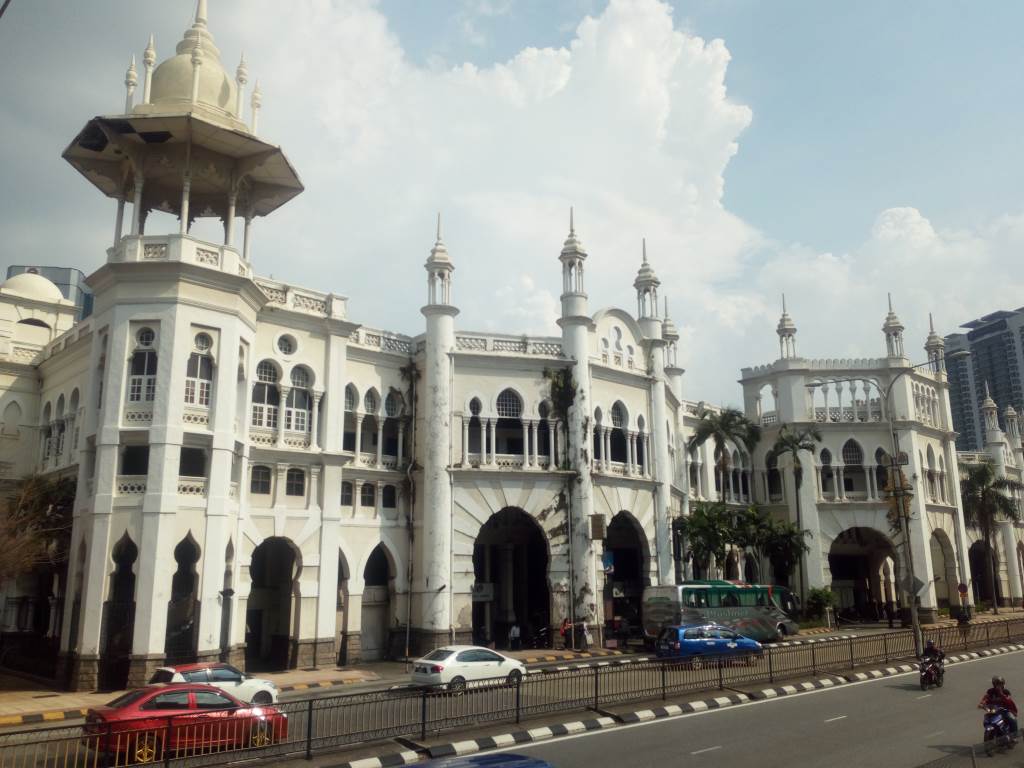 There were some Indians on the bus who heard me asking driver where in Penang island is the bus stopping and how can I get to Georgetown – they immediately offered to drive me to my hostel (and even if working as taxi drivers they would not want anything for the journey) and even asked if I want to join them for dinner:)